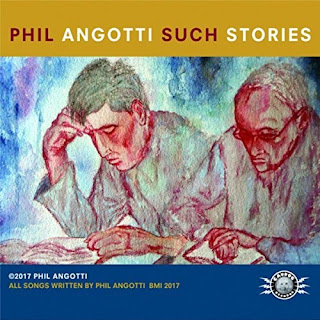 Singer-guitarist Phil Angotti’s last two albums, People And Places and Life And Rhymes, found him moving away from his power pop roots to take a more introspective approach. Such Stories, released in 2017, goes even further in that direction. The twelve songs are pretty much Angotti and his acoustic guitar, matching well-crafted observations to inviting melodies.

Angotti is known around Chicago for his tribute shows to 1960s artists like Simon And Garfunkel and The Bee Gees, and that era permeates Such Stories. “Spare Parts,” a clever song about trying out a new face, heart, and soul, evokes vintage Neil Young. The easy-going “Sunny Day On The East Side” paints a picture of visiting a neighborhood park, while the title track uses a haunting arrangement to blur the line between reality and fiction.

Even potentially over-sentimental subjects like an elderly storekeeper on “Memories Of Mrs. Grey,” or a boyhood rock star on “Singing In The Yard,” come across as authentic characters. On the edgier side, there’s a definite touch of Bob Dylan in the way a performer zings the staff and patrons at his ill-fated gig on “Hotel Bar Blues.” Angotti winds up this acoustic album with the intricate and melodic instrumental “Fair Thee Well.”
Posted by Terry Flamm at 10:09 PM