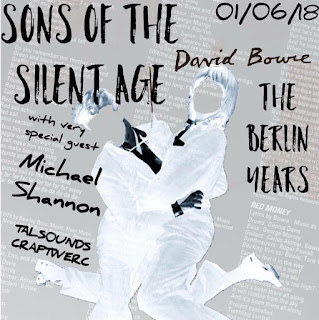 Sons Of The Silent Age poster by Molly Kate Lane

As tough as January can be in Chicago—and we’re working on a record cold snap right now—it’s a great time of year for blues fans. It’s traditionally when homegrown but international legend Buddy Guy spends a lot of time performing at his Legends blues club. As noted by writer Miriam Nunzio in the Chicago Sun-Times, tomorrow’s opening night of Guy’s 2018 residency will also serve as fundraiser for PCa Blue. The blues-infused charity organization is dedicated to finding a cure for prostate cancer. Tickets for the 21-and-older show are $55; the show at Buddy Guy’s Legends starts at 7:30 p.m.

Sons Of The Silent Age have built a strong following in the Chicago area and the David Bowie tribute act has a particularly ambitious show coming up this Saturday, January 6 at Metro. The Berlin Years will find these Chicago music scene veterans joined by critically acclaimed actor Michael Shannon as they perform Bowie’s Low, Heroes, and Lodger albums. A portion of the proceeds will benefit cancer patients at Northshore University Healthsystem’s Integrative Medicine Program. The music starts at 8:00 p.m.

There’s some retro-inspired fun coming up tomorrow night at Martyrs’ on Lincoln Avenue. Rosie And The Rivets, who play rockabilly, girl group, surf, and British Invasion songs, will share the bill with Amazing Heeby Jeebies, who mix originals with covers ranging from Lee Hazlewood and Nancy Sinatra to The Cramps. The blues/rockabilly outfit Tiny Miles Trio will also be performing. The shown starts at 8:00 p.m.
Posted by Terry Flamm at 10:10 PM