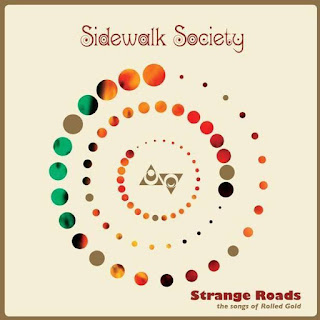 Sidewalk Society’s fascination with The Action first surfaced on a seven-inch single they recorded for the U.K. vinyl-only label Fruits de Mer in 2016. That record offered four splendid cover versions—two originally done by David Bowie and two from The Action. Bowie, of course is famous around the world, but The Action was a short-lived Mod band in 1960s England that dissolved before it could release what might have been its masterpiece.

The Long Beach, CA-based Sidewalk Society delves even deeper into its Action obsession with a new Fruits de Mer release driven by vintage demos of that lost album. Strange Roads (The Songs of Rolled Gold by The Action) is a well-crafted tribute, although a few tracks, like “Brain” and “Little Boy,” fall prey to the more quaint or self-absorbed aspects of 1968. Listening to the peppy vocals on “Things You Cannot See,” it’s easy to imagine the band members in matching blazers and turtleneck sweaters.

Fortunately, the rest of Strange Roads demonstrates the timeless power of psychedelic rock when it’s done right. “Look At The View,” which was also on Sidewalk Society’s earlier four-song single, is a celebration of nature set to a catchy, guitar and piano arrangement, while the extended instrumental passage on “Love Is All” evokes the Who. The band also cuts loose on the galloping fable “Follow Me.” Sidewalk Society likewise succeeds with its lighter material, adding gorgeous harmonies to “Really Doesn’t Matter” and combining powerful rock with a spiritual message to “Come Around.”

To see how well Sidewalk Society can do with its own material, check out my August 24, 2016 review of their Venus, Saturn And The Crescent Moon LP.
Posted by Terry Flamm at 9:16 PM