Keepers Of The Multicolored Flame 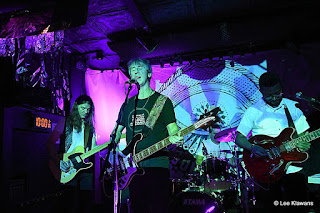 Photo of The Red Plastic Buddha by Lee Klawans.

After the first two bands performed at the Kaleidoscope Eye Festival Of Modern Psychedelia this past Saturday night, it was apparent that psychedelic rock is not strictly a baby boomers’ fascination. Diagonal and White Shape both comprise young musicians fully immersed in the genre. White Shape even organizes a psych rock festival in its hometown of Rockford, IL.

Created by Tim Ferguson from The Red Plastic Buddha; Gregory Curvey from The Luck Of Eden Hall, and journalist/photographer Lee Klawans, Kaleidoscope Eye brought 15 bands from around the country to the LiveWire Lounge on Chicago’s north side. Seven bands, including The Luck Of Eden Hall, played on Friday night, and eight performed on Saturday. I’m not sure if Ferguson has run an event like this before, but during the three-plus hours I was at LiveWire Saturday, he took to the role quite naturally. In addition to introducing each act, he helped move gear off and on the stage after each set ended.

A playlist of psychedelic music ranging from 1960s acts like Count Five to current practitioners kept the vibe going between live performances. Each band benefited from imaginative lighting and swirling visuals crafted by the same tech duo that provided first-rate sound quality throughout the evening. A merchandise table sold CDs, posters, and t-shirts of the various groups involved, and there was a sense of community in seeing so many of the musicians hanging out before and after their shows.

Diagonal, led by charismatic lead vocalist Andy Ryan, was equally proficient at crafting atmospheric dreamscapes and high energy numbers. White Shape singer-keyboards player Kayla Hall’s haunting vocals were woven into hypnotic arrangements and the band would also break loose with some hard-hitting instrumentation. Constantine, which has a longtime loyal following on the midwest club scene, dressed in flower power inspired outfits, and their well-crafted arrangements evoked Traffic by tapping into elements of jazz.

The Red Plastic Buddha once again proved it’s capable of recreating the adventurous songs vocalist-bassist Tim Ferguson composed for their albums. Guitarist Derik Kendall fueled each number but all the band members played with precision and power. They opened with “She’s An Alien” from the Songs For Mara album and followed with a number of freewheeling, psychedelic songs. I couldn’t stay for the the sets by The Orange Pop, Magic Castles, Warhorses, and Sisters Of Your Sunshine Vapor, but it’s a safe bet they carried on in mind-bending fashion.
Posted by Terry Flamm at 10:06 PM