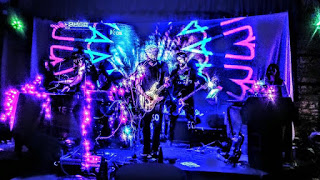 The Luck Of Eden Hall in a particularly mind-bending moment on stage.

The Kaleidoscope Eye Festival website  has profiles of most of the acts, along with ticket info and merchandise. Live Wire is located at 3394 N. Milwaukee. WXRT air personality Richard Milne mentioned Kaleidoscope Eye on his Local Anesthetic program last Sunday night, and played the tripped-out and fun “She’s An Alien” from The Red Plastic Buddha’s Songs For Mara album.

Also, Chicago Fringe Fest picks up where it left off last weekend, filling the Jefferson Park neighborhood with avant grade performances at venues like The Gift Theatre; Windy City Music Blackbox Studio; Jefferson Playhouse; and The Congregational Church. A $5.00 admission button is needed to navigate the festival, and there’s a $10.00 ticket for each show.
Posted by Terry Flamm at 10:16 PM