The Regrettes - Feel Your Feelings Fool 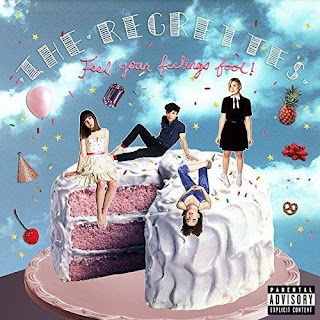 The Regrettes have been creating a buzz on the Los Angeles club scene by mixing that city’s heralded punk approach with the 1960s girl group sound. There’s a running theme throughout their full-length debut Feel Your Feelings Fool of a rebellious young woman navigating the ups and downs of relationships. Lead vocalist-guitarist and main songwriter Lydia Night consistently brings grit and humor to her lyrics and The Regrettes set them to explosive but irresistible arrangements.

The fast-paced “I Don’t LikeYou” and “How It Should Be,” which evokes Leslie Gore, celebrate ditching boyfriends who haven’t measured up. “Hot” depicts a guy who turns on lots of girls but is still bad news because he’s conceited and a liar. Even when Night creates upbeat romantic songs like “Hey Now” and “’Til Tomorrow,” they exude an off-kilter and vulnerable charm.

Other songs take aim at the limitations society places on women. “A Living Human Girl” serves up a funny list of attributes that defy the traditional ideals of female beauty, and on “Seashore,” Night lashes out at condescending attitudes. “You’re talking to me like I’m hurt,” she sings. “At least I’m not six feet in the dirt. And I’ll still kick your ass even in my skirt.” The rollicking “Lacy Loo” and satiric “Picture Perfect” are two more examples of why Feel Your Feelings Fool is such a blast.

The Regrettes are coming to Chicago for a gig at Schubas on April 2.
Posted by Terry Flamm at 10:55 PM