The Stones At Navy Pier And I Like It 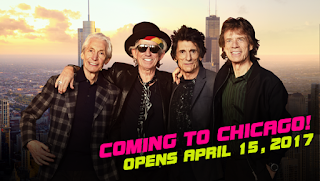 The Rolling Stones will be planting a great big kiss on Chicago when the band’s Exhibitionism show arrives at Navy Pier on April 15 and keeps rocking through July 30. Featuring guitars, posters, film, fashion, personal notes, an art gallery and other memorabilia, Exhibitionism celebrates The Rolling Stones’ 50 years of dominating rock and roll. It draws from the personal collections of Mick Jagger, Keith Richards, Charlie Watts and Ron Wood, and has previously been staged by the Aussie-based iEC Exhibitions! in London and New York.

As reported by Steve Johnson in the Chicago Tribune and Miriam Di Nunzio in the Chicago Sun-Times, Exhibitionism’s Chicago run was announced by Mayor Rahm Emanuel at a press conference last Thursday. Our city’s legacy as the birthplace of blues, along with The Rolling Stones’ early recordings at Chess Records make Chicago an obvious destination for this touring exhibit. Johnson quotes Navy Pier CEO Marilyn Gardner’s reason for wanting to be involved.

“We are redeveloping the pier not only physically but programmatically, and this is part of the new Navy Pier.”

Exhibitionism will no doubt remind some Chicago rock fans of the David Bowie Is exhibit that ran at The Museum of Contemporary Art in 2014. That event kicked off with the David Bowie tribute band Sons Of The Silent Age playing an afternoon concert at Daley Plaza, and according to Johnson, there will be Rolling Stones cover bands performing at the Navy Pier beer gardens throughout Exhibitionism’s visit. Tickets range from $25 – $35 for adults and $20 – $22 for kids 6 to 16.

This could be the first time I’ll be buying souvenirs at Navy Pier.
Posted by Terry Flamm at 9:43 PM