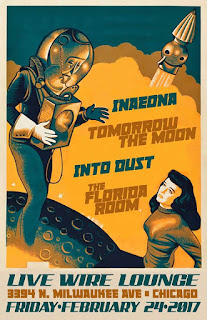 It’s been a few years since the sci-fi/psychedelic band Tomorrow The Moon played a gig on the local scene. That could be because of vocalist-guitarist Steve Gerlach’s busy schedule since he’s also a member of the David Bowie tribute band Sons Of The Silent Age and has performed with The Bad Examples and Tommy Keene. Tomorrow The Moon will be at Live Wire tonight, along with the Boston-based prog rock/industrial trio Inaenona; The Florida Rooms, which is actually a three-piece folk/punk band from Chicago, and the local quintet Into Dust, whose Bandcamp page describes its music as “spooky and heavy.” Tomorrow The Moon’s latest album, the 14-song Blow, Mind Blow, is available on iTunes.

This Sunday will be the last opportunity to catch The Invention Of Morel while it’s at The Studebaker Theater in Chicago. Former Police drummer Stewart Copeland was commissioned to compose original music for this opera, which based on a novel by Adolfo Bioy Casares. Tickets range from $39 to $125.

Wilco will wrap up its Winterlude 2017 run at the Chicago Theatre tomorrow. The band released its latest album, Schmilco, in 2016.

The American Writers Museum, which officially opens at the corner of Michigan Avenue and Lake Street on May 16, held its first press conference earlier this week. According to Steve Johnson’s piece in the Chicago Tribune, the museum will have 11,000 square feet of space for galleries honoring American writers. Upcoming exhibits include “Chicago Writers: Visionaries and Troublemakers” and “A Nation Of Writers.”

The Chicago Sun-Times recently reported that the Abraham Lincoln Presidential Museum in Springfield will have a new exhibit titled “Cubs vs. Cardinals: The Rivalry.” It will feature rare and important items from both teams dating back through their long histories, and was created with assistance from The National Baseball Hall Of Fame. No word yet on whether the Barack Obama Presidential Museum will have a Cubs vs. White Sox exhibit.
Posted by Terry Flamm at 10:01 PM