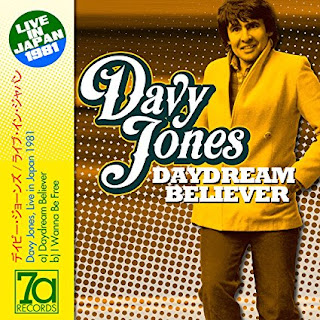 Micky Dolenz has a show tomorrow night at The Arcada in St. Charles. Other upcoming shows at The Arcada include Greg Kihn on March 10, Poi Dog Pondering on May 13, and Denny Laine of Moody Blues and Wings fame with Fran Cosmo from Boston and Joey Molland from Badfinger on June 10.

In other Monkees news, The Second Disc website recently reported on a new seven-inch single from 7A Records that features Davy Jones performing “Daydream Believer” and “I Wanna Be Free” in Japan back in 1981. The release will be limited to 500 copies on clear yellow vinyl, and is available on Amazon.

Those of us who couldn’t make it to the Los Angeles Convention Center tonight to see Tom Petty will being honored as the MusiCares Person of the Year, had an opportunity join in some of the fun via live reports on the MusiCares Facebook page. Visitors can still help out the charitable organization by clicking on the page’s Donate Button.

The MaM! exhibition The 33 – A Cabinet of Curious Characters continues at Rotofugi Designer Toy Store and Gallery through February 26. Rotofugi is located at 2780 N. Lincoln Avenue in Chicago.

Factory Theatre is having a launch party for its latest production Born Ready next Thursday, February 16 at the Little Unicoco Nigerian restaurant on Howard Street. Born Ready, a play by Stacie Barra set in the 1950s, concerns an elderly former child star and a much younger woman performing as a comedy duo. It officially opens on March 24 at Factory, with previews starting on March 17.

Liz And The Lovelies, a Chicago area band that describes its music as folktronica, have a release show for their five-song EP Progress Into Simplicity coming up on April 4 at the North Bar in Chicago. I caught a solo set by singer-guitarist Liz Chidester, who’s originally from Virginia, a while back at The Abbey Pub, and was impressed with her songwriting and powerful vocals.

This should come as no surprise to those of us who’ve seen bassist Derrick Anderson perform live with The Bangles and The Smithereens, but it’s still very cool news. Anderson has an album coming out on April 7 that will include guests appearances from Matthew Sweet, along with members of The Bangles, The Smithereens, The Cowsills, and The Muffs. The video for his song “Happiness,” which can be seen on the Blurt website, is certainly promising.

Singer-guitarist Phi Angotti has kept busy with tribute shows for The Rolling Stones, The Beatles, The Monkees, and other famous acts over the past years, but he returns to making original music on his upcoming Such Stories album. His latest release will be a mostly acoustic effort that includes a track based on a Twilight Zone episode. According to Angtotti’s Facebook page, we can look for Such Stories and a release show sometime in March.

Actor Peter Capaldi recently announced on BBC Radio 2 in the UK that he won’t play the title character in Doctor Who after the current season. As reported in the science/culture website The Verge, Capaldi felt it was time to move on. A replacement for the role has yet to be announced.

Today’s issue of the Chicago Sun-Times has an item by staff reporter Miriam Di Nunzio regarding a new film about Chicago improv pioneer Del Close. Mike Meyers, who performed at Second City long before his Saturday Night Live, Wayne’s World, and Austin Powers days, is slated to portray the late actor/director. Second City alum (and former Hill Street Blues cast member) Betty Thomas will direct and it’s believed most of the film’s scenes will be shot in Chicago.

Chicago free paper Red Eye moved to its new weekly format yesterday with a fifty-page issue that focuses on food and entertainment. The Reader, which has been coming out every Thursday for decades, responded with ads in the Sun-Times proclaiming itself as Chicago’s Only Weekly That Matters. The Reader has a well-earned reputation for political reporting as well as its entertainment coverage, and combined the two this week with a cover story about local musicians defending the Affordable Care Act.
Posted by Terry Flamm at 11:28 PM