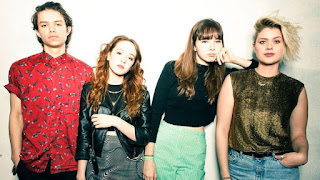 Regrettes, we’ll have a few. Photo from The Regrettes Facebook page.

The Regrettes have been creating a buzz on the L.A. club scene, and will be coming to Chicago for a show on April 2 at Schubas. On its new Feel Your Feelings Fool album, the band backs a two-fisted feminist message with catchy arrangements that mix vintage punk with the 1960s girl group sound. I’m hoping to post a review of the album some time this week.

The Second Disc website recently reported on The Zombies’ Odessey And Oracle: 50th Anniversary Edition being released on March 17 by the Varese Vintyage label. This latest version includes seven bonus tracks that are alternate mixes of some of the album’s original tracks, and arrives just as The Zombies are in the midst of an Odessey And Oracle: 50th Anniversary tour.

Congratulations to former White Sox left hander Mark Buehrle on having his No. 56 jersey retired by the team. Buehrle compiled a 161-119 record with the Sox, and was chosen four times for the All-Star Game.

So that catchy song that jumped out at me on Emma Mac’s morning show on WXRT turns out to be “High Ticket Attractions” by The New Pornographers. The seven-member band’s next album, Whiteout Conditions, isn’t due out for a couple of months, but “High Ticket Attractions” is available to download now on iTunes, along with the also appealing “This Is The World Of Theatre.”

Kedi, director Ceyda Torun’s new documentary about the free-roaming but not necessarily feral cats in Istanbul, is currently running at the Music Box Theatre on Chicago’s north side.

Tickets are now on sale for Exhibitionism, a massive exhibit of artifacts from The Rolling Stones, that opens on Navy Pier April 15 and will run through July 30.

There will be an International Woman’s Day art sale from 1:00 to 5:00 p.m. on March 11 at Bourdage Pearls on Ravenswood in Chicago. Local artist Brenda Goodbread Walker will be showing some of her work and there will be an acoustic performance by Graham Elvis. at 3:00 p.m.
Posted by Terry Flamm at 10:09 PM