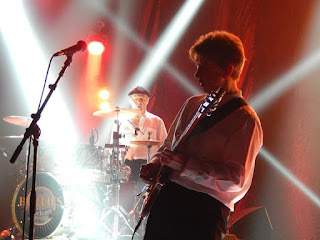 Photo of Hicks and Elliott from the Facebook page Tony Hicks . . . The Music, The Memories, The Man.

Happy birthday to Tony Hicks, who started playing lead guitar for The Hollies back in the early 1960s and has been with them ever since. The band’s current lineup, which also includes original drummer Bobby Elliott (a belated December 8 birthday wish to him) tours extensively throughout Europe but hasn’t been stateside since 2002. Hicks and Elliott are two of the most underrated musicians from the original British Invasion, but they’re highly respected among their peers, and are often praised for their expertise by Little Steven Van Zandt on his Underground Garage syndicated radio program.

There’s still time to vote for Little Steven’s Underground Garage Coolest Song In The World 2016. Fans can choose from a number of tunes hand-selected by Mr. Van Zandt, including ones by Cheap Trick, The Shelters, The Monkees, The Rolling Stones, The Weeklings, Kurt Baker Combo, The Anderson Council, and Jeff Beck.

Depending on when you see this, there might still be time to catch the Big Hair Big Trouble Holiday! bash at Carly’s Lounge at 2251 W. Devon on Chicago’s north side. Singer Ary Jeebie and vocalist-guitarist-keyboards player Ellis Clark are performing ‘60s and ‘70s “Groovy Country Weirdness.” There is no cover charge.

Tickets went on sale today for the Tom Petty & The Heartbreakers with Chris Stapleton concert at Wrigley Field next June 29. The date is part of the band’s 40th Anniversary Tour.

Tellin’ Tales Theatre wraps up its run of Six Stories Up In A Snowstorm - A Winter Mystery at the Athenaeum Theatre this weekend. It’s a 90-minute original musical created and performed by “adult mentors and middle school apprentices with and without disabilities.”

Chicago’s long-running free paper The Reader is presenting the Made In Chicago Market this Sunday, from 11:00 a.m. to 6:00 p.m. at Chicago Plumbers Hall on Washington, just west of downtown. Admission is free.

Fans of The Move will be able to hear the grass grow on a new deluxe CD/DVD collection titled Magnetic Waves Of Sound: The Best Of The Move that’s due out on January 27. The 21-track CD features remastered hit singles and album tracks; while the DVD offers an hour’s worth of Carl Wayne and company performing on UK and German TV shows. Magnetic Waves Of Sound is already available for pre-order from Cherry Red Records.

It will be an evening of Chicago-based power pop and indie rock when The Lilacs perform at Metro on March 4, along with Material Reissue and Bad Examples.

The Hemmingbirds will be doing a farewell show on Tuesday, December 29 at Lincoln Hall. They’ll be joined by Mutts, Archie Powell And The Exports, and Jesse W. Johnson.

There was an extensive article by Jessi Roti in yesterday’s Chicago Tribune about artist Nate Azark’s Rock On Paper exhibit at the Chicago 2112 gallery. Azark creates concert tour posters for indie rock bands like Florence + The Machine and The Orwells. Chicago 2112 is located at 4245 N. Knox Avenue; the exhibit runs through the end of this month and admission is free.
Posted by Terry Flamm at 11:04 PM