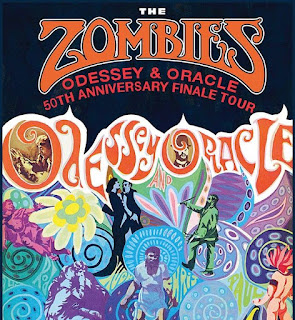 It’s Christmas Eve Eve. Hopefully, everyone has finished their gift buying, party planning, and grocery shopping for all the festive get-togethers taking place this weekend. My family is celebrating on Monday, which gives me extra time to catch up my seasonal DVD and VHS watching. I still have to somehow fit in A Charlie Brown Christmas, The Grinch Who Stole Christmas (original version), Mr. Magoo’s Christmas Carol, The Snowman (Oscar-nominated animated short), A Christmas Carol (Alastair Sim version), and It’s A Wonderful Life.

Sad to say, neither of my top choices for the 2017 Rock And Roll Hall Of Fame induction—The Cars and The Zombies—made the final cut. Zombies frontman and genuine class act Colin Blunstone posted a gracious comment on Facebook saying, “I really hope no one is feeling too despondent about The Zombies not being inducted into The Rock and Roll Hall of Fame!!!” I had the honor of doing a telephone interview with Colin for the Illinois Entertainer a few years back, and I can just hear him saying the above quote in his elegant, soft spoken manner. His FB post went on to say, “I’m really thrilled that we were nominated in the first place and that so many wonderful people took the time to support us in the public vote.” The Zombies will be touring in support of their 50th Anniversary Tour of their landmark Odessey & Oracle album.

If you can’t believe New Year’s Eve is already coming up next weekend, here are some suggestions for places to ring in 2017: Critically acclaimed, Ohio-based alt rock/roots rock band Over The Rhine will be at The Old Town School Of Folk Music. Punk priestess Patti Smith and her band will be at Park West; EXPO ’76, one of the most fun and eclectic cover bands you could hope to see, and guest vocalist Kelly Hogan from The Flat Five will be at FitzGerald’s; and Nice Motor, Lucky Boys Confusion, and Mark Rose from Spitalfield will be at the Double Door.

There will be a Phil Angotti and Friends Holiday Party on Wednesday, December 28 at Simon’s Tap on Chicago’s north side. Angotti will be making merry with Rachel Drew, Tommi Zender, Alton Smith, Tom Ryan and special guest Casey McDonough. There will be an opening set by Hrundi V Bakshi.

The Hemmingbirds will be doing a farewell show on Thursday, (not Tuesday as I posted here earlier) December 29 at Lincoln Hall. They’ll be joined by Mutts, Archie Powell And The Exports, and Jesse W. Johnson.

Nate Azark’s Rock On Paper exhibit continues its run at the Chicago 2112 gallery. Azark creates concert tour posters for indie rock bands like Florence + The Machine and The Orwells. Chicago 2112 is located at 4245 N. Knox Avenue; the exhibit runs through the end of this month and admission is free.

All I want is my fair share. All I want is what I have coming to me. Emerald City Theatre is presenting A Charlie Brown Christmas through January 8 at the Broadway Playhouse at Water Tower Place.

In the holiday spirit of giving, local publisher Curbside Splendor is continuing its six-week charity campaign by donating half of all the proceeds from its online store this week to anti-poverty organization Heartland Alliance.

My wife Pam and I saw The Second City production of Twist Your Dickens this afternoon at the Goodman Theatre in downtown Chicago. It’s a rowdy and consistently funny mix of anachronisms, pop culture references, improv, and imaginative costumes used to poke fun at Charles Dickens’ beloved A Christmas Carol. Written by Peter Gwinn and Bobby Mort, and directed by Ron West, Twist Your Dickens runs through December 30.