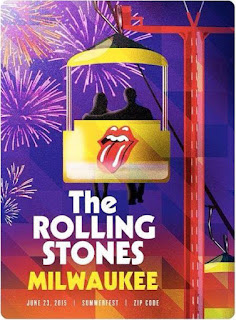 As reported on Chicago radio station WXRT’s website and Facebook page this past Wednesday, Chicago blues legend Buddy Guy joined The Rolling Stones for some extended jamming on “Champagne And Reefer” during their concert at SummerFest in Milwaukee. In addition to forging a guitar triumvirate with Ron Wood and Keith Richards, Guy also took a turn on lead vocals. He and Mick Jagger were both impressive belting out the Muddy Waters classic. In other Stones news, the band recently released its From The Vault: The Marquee—Live In 1971 DVD.

Beat Swap Meet, a traveling event that bills itself as “a celebration of vinyl culture” will feature invited record collectors and dealers from across the country at Thalia Hall, 1807 S. Allport Street in Chicago tomorrow from 12:00 to 5:00 PM. Attendees will be able to buy, sell, or trade blues, funk, jazz, hip hop, new wave, psych, punk, rap, reggae, ska, soul, and world LPs and 45s while listening to DJs. Admission is free with a donation of a canned good.

Gerry O’Keefe will perform summer-inspired songs by The Beach Boys, The Go-Go’s, The Monkees, The Drifters, The Kinks, Keith, Katrina And The Waves and others from 6:30 to 8:30 PM tomorrow night at the kid-friendly Buzz Cafe in Oak Park.

Kelsey Skutnick, a Chicago-based artist I first encountered on the CTA Redline when she was giving out mysterious strips of paper with her name and an illustration on them, has created an 18 x 24 Grateful Dead 50 print for all the Deadheads who’ll be gathering to catch the band’s final three shows next weekend at Soldier Field. She plans to sell them on the street (I’m not sure which street) so if you buy one be sure to tell her you read about it on Broken Hearted Toy.

A tip of the bowler to English actor Patrick Macnee, who played dapper and deadly John Steed on the British comedy/adventure series The Avengers for several years. He passed away yesterday at the age of 93.

Chicago Tribune rock critic Greg Kot has interviewed U2 on at least a few occasions over the years, and his latest meeting with them has resulted in an informative and fascinating two-part article. Seeing U2 perform in live in Montreal seems to have given Kot a better appreciation of Songs Of Innocence, an album he wasn’t overly impressed with when it was released. Bono meets him halfway, conceding, “If I’m honest, there is something about the sound of the record that is a little too organized. That’s what happens when you’re too long in the studio.” U2 is currently in the midst of a five-date tour of Chicago.

Aimee Mann, Pink Martini, and The Von Trapps will share a triple bill bext Wednesday, July 1st  at Ravinia. Brian Wilson, a hot topic these days because of the Love And Mercy bio-pic, along with Al Jardine and Blondie Chaplin will visit Ravinia on July 6th. Rodriguez, of Searching For Sugar Man fame, is also on the bill.

The original lineup of The Smoking Popes—including long-absent drummer Mike Felumlee—has sold out its July 30th show at the Elbo Room. One of  Chicago’s more popular cutting edge bands, The Smoking Popes released the teen-centric concept album This Is A Only Test in 2011 to positive reviews. (See Archives, June 6, 2011 for a review.) Their opening act at Elbo Room will be Burnside And Hooker, a theatrical and engaging coed band that recently released its second full-length CD All The Way To The Devil.

The Hollies Official Facebook noted that the band’s optimistic and irresistible single “I’m Alive” reached Number One in the UK charts 50 years ago this week. Just a fun fact to contemplate now that I’ve officially declared this A Hollies Summer in Chicago.

Guitar-driven power pop band The Bishop’s Daredevil Stunt Club has a record release show for their full-length album Rock N Roll Motorcycle Dinosaur at the Bottom Lounge on July 18th. I’ll be reviewing this 12-song effort in the near future.

The Luck Of Eden Hall is heading overseas for a UK tour that will include a gig at the 12-Bar Club with Mark And The Clouds; Emily And Angeline; Mummy; and The Blues Ghosts on July 30th in London. They’ll be back in the States to open for The Psychedelic Furs at the Skokie Backlot Bash on August 29.

Also in Palatine, the 2015 Hometown Fest over the 4th of July weekend will include performances by Serendipity, a band comprised of five young women who play originals and an eclectic selection of covers, at 5:00 PM on Friday, and the Rolling Stones tribute band Hot Rocks on Sunday at 5:30 PM.

I was disappointed to receive the manuscript for my rock and roll novel back in the mail today with a rejection slip from a local publisher. After venting on Facebook, I received a number of consoling messages from assorted friends. Thanks to everyone who reached out. I’ll be approaching new publishers and agents soon.
Posted by Terry Flamm at 10:56 PM