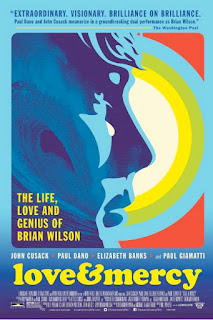 God isn’t the only one who knows how they feel about this flick. Love And Mercy, director Bill Pohlad’s look at the complicated life of Beach Boy founder Brian Wilson, has been met with rave reviews in Chicago. The Tribune’s film critic Michael Phillips proclaims it “the best musical biopic in years,” while Richard Roeper at the Sun-Times calls it “energizing, meticulously crafted, [and] nearly perfect.” Both writers praised the performances of actors Paul Dano and John Cusack, who portray Wilson at different times in his life, as well as the film’s imaginative use of The Beach Boys’ music.

Once, the musical adaptation of the John Carney-directed Irish movie, wraps up its limited run in Chicago this Sunday at the Cadillac Palace Theatre. If you believe Chicago Tribune critic Chris Jones (and I always do) this is a must-see production.

Graham Parker And The Rumour have a 4:00 PM gig at City Winery Chicago this Sunday and an evening show on Monday, June 8th. One of my earliest posts here on BHT was a review of an outdoor concert Parker did on the north side of Chicago. See Archives, August 11th, 2009.

Tomorrow, June 6th, is the Opening Day for The 606, an ambitious, newly created recreation concept that connects the Bucktown, Wicker Park, Logan Square, and Humboldt Park neighborhoods via a former railroad line called the Bloomington Trail. The family-friendly event will feature music, interactive art, food, and processions.
The 32nd Annual Chicago Blues Festival takes place next weekend, June 12 – 14, in Grant Park, with performances by Clarence Carter; Taj Mahal Trio; Buddy Guy; and Billy Branch and the Sons of Blues with special guest Eddy “The Chief” Clearwater. On Sunday, June 14, there will be a Willie Dixon Centennial Tribute at 6:20 PM and a Muddy Waters Centennial Tribute at 8:05. A number of blues artists will be involved in both of those shows.

A few weeks back, I mentioned The Hollies’ new five-disc boxed set Changin’ Times - The Complete Hollies - January 1969 – March 1973 that’s about to come out on the Parlophone label. Now the Second Disc, a website that does an amazing job of keeping tabs on all the latest releases from vintage bands, has posted an extended piece on Changin’ Times.

I never promised you a Ramones garden. Marty Scott, a musician known for his work with Liverpool Legends and the power pop band The Critics, recently posted a photo on Facebook of some lawn ornaments that looked like The Ramones. He never said where they came from, and I became obsessed with finding the statues. Now with the help of a first-rate investigator (my wife Pam), I found the source. You can pick up a set of The Ranomes, created by the company Gnomore Heroes, for £79.95 on the UK website Alternative Merchandise website. Unfortunately, Pam has told me they would not be allowed in our garden.

Just a few days after I mentioned Under Covers, a new Internet hardboiled detective spoof created by Mary-Arrchie Theatre actor/director Carlo Lorenzo Garcia, the show is in the running for the IndieWire May Project Of The Month. Coincidence? I think so. You can vote for Under Covers at the IndieWire site.

In last week’s Slumgullion, I mentioned that The Neverly Brothers’ recently released A Magical History Tour will be available separately as Volume 1 and Volume 2 or as a set. They have responded to my request for more information about these CDs. “The Neverly Brothers CDs are a true representation of our live show concept,” the band said via email. Volume 1 has covers of 1950s rock pioneers and Volume 2 has renditions of 1964 British Invasion acts. The package is a throwback to the old gatefold sleeve albums. The discs are currently available at The Neverly Brothers’ shows and should be offered through their website in the near future.

Soundtrack Serenade, a collective of local musicians who do tribute shows on a regular basis, will perform the music of This Is Spinal Tap this coming Tuesday at Martyrs on Lincoln Avenue.

Music On Stage will be presenting Damn Yankees at Cutting Hall in Palatine through June 14th.

Now that FIFA president Sepp Blatter has stepped down, a familiar face has offered to take the job. As reported by Robert Channick in the Chicago Tribune, ad agency employee/major soccer fan Mike D’Amico has posted a satiric clip on YouTube announcing his candidacy. D’Amico, who worked at the agency where I did freelance proofreading last summer (he’s since moved on), earned fame and the moniker Teddy Goalsevelt by dressing as Teddy Roosevelt at the World Cup Games in Rio.
Posted by Terry Flamm at 11:02 PM