Celebrating The 4th With The 1960s 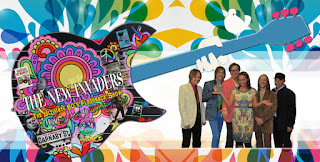 An upcoming 4th of July concert at Lake Ellyn Park in Glen Ellyn by one of my favorite local copy bands just might qualify as an official event in what I have designated as A Summer Of The Hollies. (See last Wednesday’s post.) I’ve heard The New Invaders play Hollies songs on a few occasions, and having exchanged emails with guitarist-vocalist Jimmy Herter, I’ve learned that he’s definitely a fan of Manchester’s finest. He’s logged more time covering The Beatles and The Monkees in other tribute bands, but the man knows his way around “Bus Stop.”

The New Invaders describe their show as taking audiences from the British Invasion to Woodstock, and since all six members (five guys and one woman) sing, there are a lot of harmonies in their approach. Plus, they’re versatile musicians—Herter also plays harmonica, flute, and sax—which enables them to cover everything from Sonny & Cher to Crosby, Stills, Nash, and Young. Their eclectic repertoire includes Sly And The Family Stone, The Who, The Lovin’ Spoonful, The Fifth Dimension, The Beatles, The Mamas & The Papas, The Monkees, Badfinger, Jimi Hendrix, Deep Purple, and The Animals.

The New Invaders also cover acts that didn’t have too many hits, but whose work played an essential role in the 1960s. This might be one of the few bands that honors The Electric Prunes, The Seeds, The Chambers Brothers, and Iron Butterfly. With that wide of a selection at their disposal, there’s no guarantee that a Hollies song will make it into this Saturday’s 1:00 to 2:30 PM show. But it’s unlikely that any fan of 1960s rock will come away feeling disappointed.
Posted by Terry Flamm at 8:37 PM