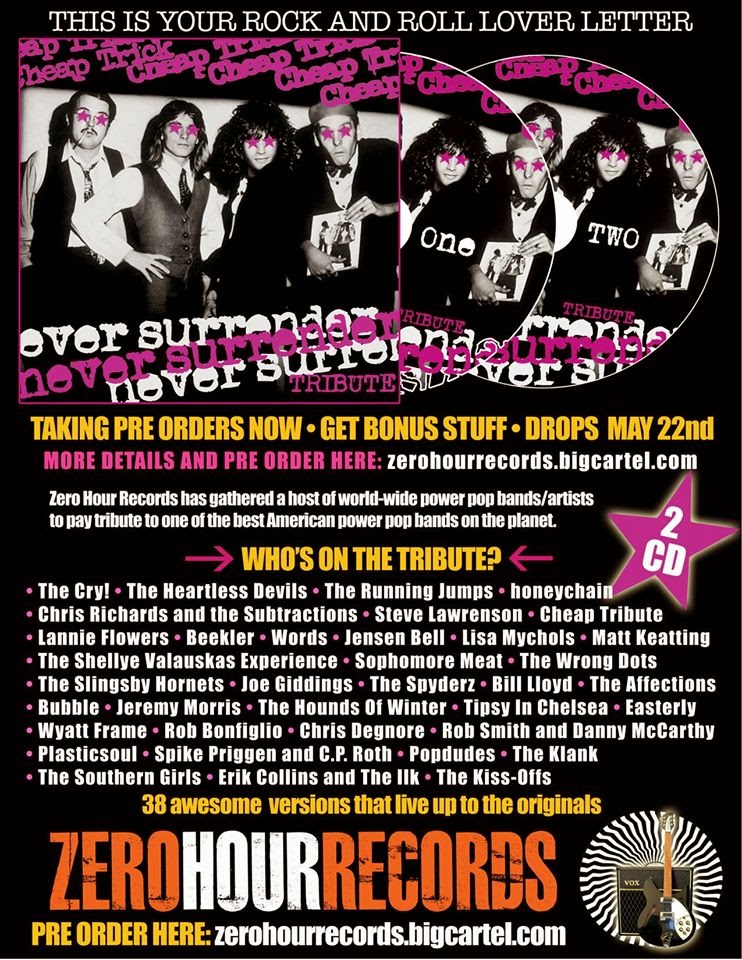 The What Four, a local quartet featuring Matthew Warren, Phil Angotti, Scott Ligon, and Casey McDonough, will be performing tonight at FitzGerald’s in Berwyn.

Phil Angotti will be performing on the first three Tuesdays at The Hideout in May. His May 5th show will be a tribute to Ray Davies and The Kinks, with special guests Ellis Clark and The Ivorys.

NXNWH. The Fox And The Hounds, an alt rock/theatrical band that recently played International Pop Overthrow - Chicago, and the Who tribute band Who’s Who are among the 45 local bands scheduled to perform this weekend at Edison Park’s first North By Northwest Highway Music Fest. Emerald Isle, Edison Park Inn, Firewater Saloon, and Moretti’s are the venues around the Chicago northwest side neighborhood that will be hosting the various acts. Tickets are $10 for a day. $25 for the weekend; and $3 for an individual show.

Tomorrow is Independent Book Store Day and 12 stores in Chicago will be joining in the celebration. The official website promises special offers, author events, raffles, and refreshments, and lists the different locations that will be involved.

Congratulations to alt rock/country band Dolly Varden on their 20th Anniversary. They’ll be celebrating with a show at the Old Town School of Folk Music tomorrow night.

The Kooks are in town for a concert at The Vic tomorrow night. The English band, which has always exuded a working class charm with its catchy songs, experimented with some funkier and techno sounds on its latest effort Listen.

The Everly Hillbillies, an Everly Brothers tribute side project fronted by Mike Cohen and Jeff Janulis of the power pop band The Abbeys, will be performing tomorrow night at Salt Creek Pizza in Elk Grove.

There’s a nice big color photo of Crosby, Stills and Nash in the On The Town section of today’s Chicago Tribune, referring to their two shows next week at the Chicago Theatre. But someone should tell the person who wrote the blurb that it was Joni Mitchell who composed “Woodstock.” As noted earlier this week on BHT, Graham Nash will soon embark on a solo tour that will bring him to the Arcada Theatre in St. Charles on July 28th.

In that same section of today’s Trib, rock critic Greg Kot has an interview with Paul Natkin about the iconic photographer’s current Paul Natkin: Superstars exhibit at the Ed Paschke Art Center on Chicago’s northwest side. Admission is free, and the exhibit runs through June 14th.

Congratulations to musician/producer Jeff Lynne on getting a star on the Hollywood Walk Of Fame.

Rain - A Tribute To The Beatles will run for one week in Chicago, at the Bank Of America Theatre from May 20 through the 24th.

Kate Pierson of The B-52’s has a gig coming up at City Winery Chicago on July 21st.

Chicago Zine Fest takes place next Friday, May 8th, and Saturday, May 9th, at the Plumbers’ Union Hall on Washington Blvd. Friday will be devoted to a panel discussion and readings, while on Saturday there will be a Zine Exhibition showcasing zines, self-published books, and comics.

Fans of The Bangles can bid on an autographed acoustic guitar the band has donated to help support the Sweet Relief Musicians Fund. The auction ends next Tuesday, May 5th.

Black Ensemble Theater is currently staging Sounds So Sweet, Rueben D. Echoles’ tribute to the girl groups over the decades.

Congratulations to Heart’s Ann Wilson on her recent marraige to Dean Wetter.

Back when I was a kid, one of the coolest shows on TV, along with The Avengers, I Spy, and Mission: Impossible, was The Man From U.N.C.L.E. So it was interesting to read journalist Rebecca Keegan’s interview in last Sunday’s Chicago Tribune with the stars of director Guy Ritchie’s new film concerning agents Napoleon Solo and Illya Kurakin. Even though the movie update of The Avengers several years ago was disappointing, something about the U.N.C.L.E. update looks like it could recapture that 1960s allure.
Posted by Terry Flamm at 10:24 PM