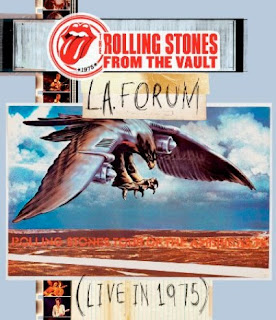 These concerts, performed six years apart with the same core band members, prove that Rolling Stones fans can pretty much always get what they want. Mick Jagger, Keith Richards, Charlie Watts, Bill Wyman, and Ronnie Wood, backed by noted session musicians, including  Billy Preston, Ian Stewart, Ian McLagan, and Bobby Keys, rocked for over two hours at each of these gigs. The set lists were almost completely different each time out but given this band’s extensive repertoire, it’s likely everyone went home happy.

Judging from the liner notes on the packaging, these DVDs from Eagle Vision could be the opening salvo in a series of live concerts pulled from the official The Rolling Stones archives. The footage for both has been restored and the sound remixed. Hampton Coliseum (Live In 1981) was directed by Hal Ashby and Tom Trbovich for a pay-for-view TV event, and is the more polished of the two. L.A. Forum (Live In 1975)  was filmed by The Record Plant, and while the images are blurry from time to time, like Hampton Coliseum (Live In 1981) it offers an onstage view of one of the greatest bands in rock history.
Posted by Terry Flamm at 9:49 PM