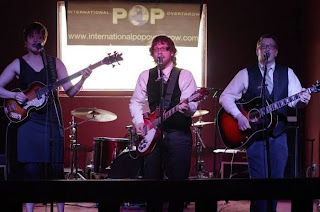 For the past few years, The Unswept’s official bio described how cousins Charlie and Ryan O’Brien first performed with a band in Sheffield, England before moving to the Chicago neighborhood of Logan Square in 2013. Since making their debut as a duo at International Pop Overthrow - Chicago that year, they’ve added Liz, who supposedly is another O’Brien cousin from the old neighborhood across the pond, on bass along with a drummer. A quick scan of the band’s website will have you wondering just how much of this back story actually happened, but it’s all done with an appealing sense of humor. Charlie and Ryan’s wit and charm has been evident throughout live performances, a 2014 self-titled debut, and the recently released The Unswept Today!

As the band’s chief songwriters, Charlie and Ryan continue to mix self-effacing lyrics with three-part harmonies and catchy arrangements that hark back to the earliest days of the British Invasion. On “Super Sad,” the talky vocals are at odds with the ringing guitars and irresistible melody, but the song still works as a satire of people intent on wallowing in self pity. “Please, Please Look My Way” is from the point of view of a guy crushing on a woman who works at the local department store, and on the acoustic-based “Mellow Doubt,” a lad fears he’ll never be good enough for the woman he loves. Even the peppy “(You Can) Do The Math,” which overflows with clever compliments for the beloved, tries to downplay the success of a romantic relationship. “Get Away” offers another intriguing juxtaposition, as the band uses some mind-bending psychedelia as the backdrop for a guy kicking his girlfriend out of their apartment.
Posted by Terry Flamm at 9:31 PM