Various Artists - Postcards From The Deep 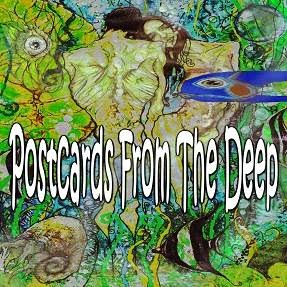 Today’s post is a combination Halloween playlist suggestion and a various artists album review. Postcards From The Deep is from the English indie label Fruits de Mer, although this time out it’s not on colored vinyl. Even though none of the songs has a holiday theme, this new release is being billed as a Christmas 2014 limited-pressing, and consists of 10 flexi-discs, 10 postcards created by artist Mick Dillingham (one postcard for each flexi-disc) a poster, and a CD with all 10 songs. There will only be 700 copies released to the entire world.

According to the rather self-effacing but funny press release (“yes, it’s another case of the same old, same old from Fruits de Mer”), the CD version is necessary because while flexi-discs make cool collectors items, their audio quality leaves a bit to be desired. As on a number of previous Fruits de Mer efforts, the mission here is to have modern bands cover songs (major hits as well as rarities) from the late 1960s and early 1970s. Far from being a “same old” thing, this approach has yielded adventurous results, and that’s certainly the case with Postcards From The Deep.

The entire CD is consistently wild enough for any party, and some tracks would be particularly well-suited for Halloween. The Loons’ cover of “Celestial Empire,” originally done by Dragonfly, is an energetic tale of a magical woman, and when The Crawlin’ Hex delves into “I’m A Living Sickness” by Calico Wall, it becomes a harrowing ride through a winding tunnel. The mind-altering “Brainticket,” originally recorded by the band Brainticket and done here by Astralasia, opens with distorted vocals and otherworldly synth noises. Fruits de Mer stalwart Icarus Peel electrifies the Laurie Johnson-composed theme from the 1960s Brit TV show The Avengers, transforming it into something Jeff Beck might have recorded.

The Chicago-based band The Luck Of Eden Hall delivers a thundering yet authentic take on Count Five’s classic “Psychotic Reaction,” while the always-enchanting Crystal Jacqueline succeeds with the catchy garage rock of “You Just Gotta Know My Mind” (previously been recorded by Donovan and Dana Gillespie.) The Thanes blast through “LSD” by The Pretty Things, while Schizo Fun Addict adds some indie rock style male-female vocal interplay to their haunting version of The Sorrows’ “Take A Heart.”

Note: According to the Fruits de Mer press release, some of the tracks on the Postcards From The Deep CD were re-recorded by the bands and are different from the flexi-disc versions, as well as from versions on the promotional CD.
Posted by Terry Flamm at 9:59 PM