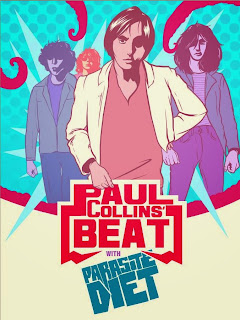 The Paul Collins Beat, an influential power pop band that got its start in the 1980s, continues to stay active all across the USA. The current lineup, led by Mr. Collins, is teaming up with the Nashville-based punk band Parasite Diet for gigs in Wisconsin, Indiana, Kentucky, Georgia, and Louisiana throughout January.

I was hoping The Zombies would be among the 2014 Inductees to the Rock And Roll Hall Of Fame,  but they didn’t make the cut. Maybe next year. In the meantime, congratulations the artists who were chosen: Peter Gabriel, Nirvana, Cat Stevens, Kiss, Daryl Hall And John Oates, and Linda Ronstadt. The E Street Band; Rolling Stones producer/mentor Andrew Loog Oldham; and Brian Epstein, the man who translated the genius of The Beatles to the rest of the globe, will also be honored.

The sharp-tongued and critically acclaimed power pop band Archie Powell And The Exports  plan to release their third CD next year, and they’ll be ending 2013 in style with a New Year’s Eve gig at the Emporium Arcade Bar on Milwaukee Avenue in Chicago. The Noise FM and Hemmingbirds are also on the bill.

Chicago’s top boss, Mayor Rahm Emanuel crept into the WXRT studio this past Wednesday, but not to steal their presents or the roast beast. He was there to surprise radio personality Terri Hemmert with an official proclamation that December 18th was Terri Hemmert Day throughout the city. Loyal XRT listeners would agree it’s a well-deserved honor, considering Hemmert has been entertaining and enlightening listeners for 40 years. Congratulations, Terri.

Blondie has a new single called “Sugar On The Side” available on on iTunes. The slow and sensuous tune moves to a ska rhythm and features some guys singing in Spanish, in addition to Deborah Harry’s lead vocals.