Christmas Songs From The Luck And The JAC 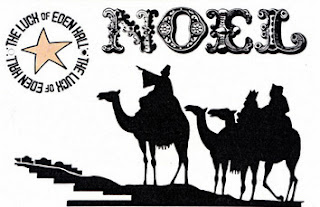 The tradition of rock bands giving us their take on this festive season lives on, as numerous artists are releasing special holiday recordings. Here are two recent examples.

Noel And Other Holiday Classics, which is currently available as a name-your-price download on The Luck Of Eden Hall’s Bandcamp page, appears to be a mix of old and new material. Their garage rock version of the classic hymn, “Noel” was first released on a cassette decades ago, but hasn’t lost a bit of its psychedelic allure. The high-speed song takes some twists and turns, and includes angelic backup vocals.

On “The Little Drummer Boy,”the band kicks off a head trip to Bethlehem with church organ music before moving on to a slow-moving, dreamy arrangement. The digital album includes a pair of original tunes as well. The melodic snippet “Lucky Christmas Time” could be a carol for gamblers, with the line, “enjoy your wealth” mixed in with words of holiday cheer. The nostalgic “Wonderful Red Stockings” is fun look at a family gathering on Christmas morning, and adroitly blends rock and classical music.

Australian singer/multi-instrumentalist Joe Algeri has a history of releasing pop-oriented Christmas music. A few years back, he recorded “Chris Hillman Christmas” with The Britannicas, an international trio that includes himself, Swede Mangus Karlsson and American Herb Eimerman. The chiming, heavily 1960s influenced song was a combination tribute to The Byrds’ guitarist and a fun celebration of the season. In 2012, performing under the name The JAC, he put out a full-length CD of off-kilter holiday songs titled I See Things Differently.

The recently released “I Dont Want Your Christmas Presents” once again reflects Algeri’s fascination with The Byrds. The signature ringing guitars are in place, and Algeri creates some tight harmonies with Eimerman and other guests. As with most of his material—seasonal or otherwise—the lyrics are clever and a bit unconventional. “I Dont Want Your Christmas Presents,” which is followed in the song with the line, “I just want your presence,” depicts a guy who’s not sure if he and his globetrotting girlfriend will still be together on Christmas day. Using the holiday season as a backdrop for heartache goes back at least as far as “Blue Christmas” by Elvis Presley, but The JAC puts his own spin on the situation. “I Don't Want Your Christmas Presents” is available as a free download on Algeri’s Bandcamp page.