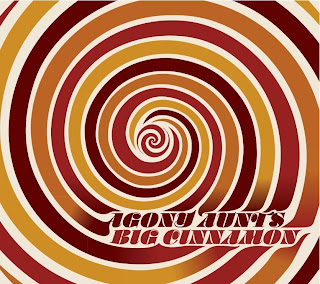 The Corner Laughers take a more out-there approach on their neo-psychedelic side project, Agony Aunts. The California-based indie rockers craft more elaborate arrangements on Big Cinnamon than they did on their 2012 Laughers release, Poppy Seeds. There’s still an emphasis on lush harmony vocals, although bassist-keyboards player Khoi Huynh, drummer Charlie Crabtree, and guitarist-keyboards player KC Bowman are more prominently featured, along with lead singer Karla Kane.
The 12 songs on Big Cinnamon feature rapid-fire rhymes within nonsensical lyrics that could have sprung from the mind of Dr. Seuss. If he had live in Haight-Ashbury in the late 1960s. The childlike and impossibly catchy “Twenty-four Mergansers” sets lines like, “Chapel of the Chimes, you’re the apple, the orange, the lime/Disturbing me inside the badger’s lair” to energetic guitars. Drawing inspiration from a 1950s TV Western’s theme, Agony Aunts combine imagery of The Lone Ranger and William Tell in “Back To Back Bill.” “Uranium My Love” remains engaging even while delving into a world of beakers and isotopes, and “You’re So Vague” lampoons some of the cheesier rock of the 1970s.

“Cool Fresh Nights,” “Family Drugs,” and the title track come across as power pop with singing that evokes The Hollies, while the more sinister “We Got That Jeckyl” could have been recorded by The Beatles in their Abbey Road era. The easy-going “Laughing At The World” is an immediate charmer, and like most of Big Cinnamon, its meaning is unclear. Those discovering Huynh, Crabtree, Bowman, and Kane via Agony Aunts are likely to check out these musicians’ regular band for more fun. They won’t be disappointed.
Posted by Terry Flamm at 10:37 PM