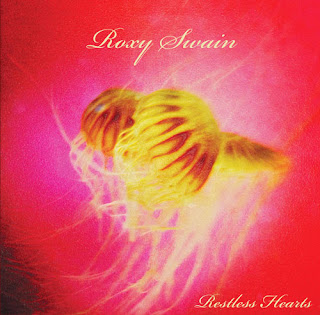 Restless Hearts, which will be available on digital and orange vinyl versions in early February, finds Roxy Swain taking a less rock-oriented approach than it did on The Spell Of Youth. It’s a risky move, considering how well the Chicago-based quartet did on that 2010 full-length debut. Fortunately, lead vocalist-rhythm guitarist Roxy Swain’s full-bodied singing, along with the band’s knack for strong melodies and well-crafted lyrics, makes the new material successful.

“Constellations Fell” and “Lexington East” are slower songs set to arrangements that border on sounding over-orchestrated, but the engaging “Impossible Wait” is augmented by Matt Walters’ twangy guitar playing. Elsewhere, Swain’s sensual approach suits the slinky blues and nocturnal hijinx of “Salt And Smoke,” and she employs a lighter singing style for the guitar-driven pop song “Sad.” “Tonight” is an immediate grabber, with Swain belting out her vocals over toe-tapping rock and roll with a touch of Country And Western. It serves as a reminder that Roxy Swain’s bread and butter might still be the energetic songs.

Roxy Swain has an in-store appearance at Val’s Halla Records in Oak Park on Saturday, February 1, and a release show at FitzGerald’s in Berwyn on Friday, February 7th.
Posted by Terry Flamm at 10:06 PM