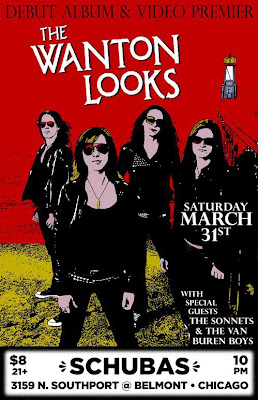 Rock Art Show, a company that sells art and photography of and by famous musicians, is offering a fine art lithograph of the Sgt. Pepper’s Lonely Hearts Club Band album cover to commemorate a special anniversary. It was 45 years ago today when The Beatles dropped by London’s Chelsea Manor Photographic Studios to pose for Michael Cooper. The resulting photograph was featured on designer Peter Blake’s iconic album cover for Sgt. Pepper. Rock Art Show’s lithograph, which was officially licensed by Apple Corps in 1993, includes replicated signatures of John, Paul, George, and Ringo. The price is $125, with free shipping.

The Chicago Acoustic Underground is presenting a showcase tonight at The Hidden Shamrock on Chicago’s north side. The lineup includes Ellis Clark, a member of The Handcuffs as well as a solo artist; singer-guitarist Christine Kent; and Henry Arth of the post jam trio, Parafeat. The show starts at 7:30, donations will be taken at the door. The Hidden Shamrock is located at 2723 N. Halsted.

Ellis Clark will be onstage with Brad Elvis and Chloe F. Orwell, the Rob & Laura Petrie of Chicago indie rock, when The Handcuffs headline a Glam/Punk/Pop Extravaganda at the Kryptonite club in Rockford on April 7th. They’ll be joined by The Wanton Looks, a hard hitting four-woman band, and the rockabilly outfit Jonny Bones & The Femurs. Note: The Handcuffs’ Flesh Hungry Dog Show with The Joans, originally scheduled for April 6th, at Jackhammer, has been moved to May 4th.

In the meantime, The Wanton Looks will have a release party for their self-titled, first CD tomorrow night at Schubas. Admission is $8, the show starts at 10:00 PM. Schubas is located at 3159 North Southport.

The Neverly Brothers will be bringing their fun celebration of rock and roll history to the Metropolis Performing Art Center in Arlington Heights this Sunday.

Whitewolfsonicprincess, the indie rock band formed by James Moeller and Carla Hayden of Black Forest Theatre, will be selling limited editions of its latest CD, 10 + 1, at a release party this Sunday, April 1st at the Red Line Tap. There’s no admission price, and the event runs from 4 - 6 PM.

Abbey Road Studios in London recently celebrated 80 years of recording some of England’s best performers with a series of talks given by Brian Kehew and Kevin Ryan, authors of the book, Recording The Beatles. For £75, visitors were given a rare opportunity to step inside Studio Two for a presentation that included a look at equipment and archive photos, as well as a discussion of recordings by The Beatles, Edward Elgar, Peter Sellers, Pink Floyd, The Hollies, and The Zombies. The initial shows rapidly sold out, so four more dates were added. Hopefully, this will be just the sort of thing Abbey Road Studios continues to do in the future.

Congratulations to Ralph Covert and G. Riley Mills, whose musical, A Nutty Nutcracker Christmas, has been nominated for the 2012 Distinguished Play Award from the American Alliance for Theatre & Education (AATE). The winners will be announced in June.

WXRT radio personality Johnny Mars, a longtime listeners’ favorite, will be premiering a brand new show this Sunday morning. The station isn’t saying much about the program, other than it follows directly after Terri Hemmert’s Breakfast With The Beatles, but loyal XRT fans will definitely want to check it out.

Great issue, Terry. I don't comment a lot, but I enjoy reading your stuff!