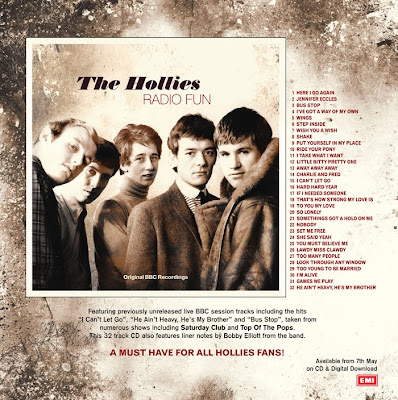 I Want You To Watch This. Cheap Trick fans in the Chicago area can catch the band performing on the PBS program, Austin City Limits. It airs tonight (Friday, March 9th) from 8:00 to 9:00 PM on WYCC Channel 20. Also, I've been informed by musician/journalist Dan Pavelich that the concert can be seen on the Austin City Limits website.

Theatre Nebula is in the midst of a three weekend run for its production of Jason Robert Brown’s contemporary musical, Songs For A New World, at Cutting Hall in Palatine. Showtime is 8:00 PM on Friday and Saturday, and 3:00 PM on Sunday. The same times hold true for next week’s performances on March 16th-18th.

Palatine resident Mordecai Smyth has a new video for “Georgina Jones” from his fun and very 1960s-influenced CD, Sticky Tape And Rust. The song is a tribute to Georgina Jones, a daring and sexy 1960s Brit TV heroine. Just kidding about Mr. Smyth being from Palatine. He’s a Londoner who recently teased me on Facebook about sharing my hometown events with rock fans in the UK. He’s still welcome to have tea at my house if he ever does visit Palatine.

I have a feeling Mordecai Smyth would really hit it off with drummer Brad Elvis. In addition to leading the Chicago indie rock band, The Handcuffs, Brad Elvis frequently entertains on Facebook with his quirky sense of humor and vast pop culture knowledge. Recently he’s been posting pics of himself modeling custom-made rock and roll shirts from Cellophane Flowers. They look really cool, especially the one inspired by The Monkees. The Westmont, Illinois company specializes in Beatles-related clothing items, but is up for trying “anything unique.” I couldn’t find a website, (there’s an English band by that name) but Cellophane Flowers does have a page on Facebook.

Congratulations to Chicago’s own synth rockers, Dot Dot Dot, who will mark the fifth anniversary of their very first performance tomorrow with a celebration at the Tilted Kilt in Elgin. And happy birthday to the band’s vocalist-guitarist, Adam.

Chicago-based alt rockers WhiteWolfSonicPrincess are having their CD Release Party for 10 + 1 on April 1st at Red Line Tap from 4:00 - 6:00 PM. Anyone who follows WWSP guitarist-vocalist James Moeller’s freewheeling JimmyDumpsSunnyJimmy blog knows how psyched he is about this new release. Looking forward to hearing the songs.

The Second Disc online newsletter is reporting that The Hollies are set to release a new CD titled Radio Fun sometime in May. The 32-track compilation will feature the band performing live at the BBC throughout the 1960s and ‘70s. Drummer Bobby Elliott wrote the liner notes. Despite the presence of songs like “Bus Stop,” “I Can’t Let,” “I’m Alive,” and “He Aint Heavy, He’s My Brother,” Radio Fun isn’t a greatest hits package. It concentrates instead on album tracks and cover versions of other artists. Very fun, indeed.

Michael Quercio, the former lead singer-bassist for the 1980s neo-psychedelic band The Three O’Clock now does a podcast with co-host Lina Litonjua called The Michael Quercio Paisley Underground Consortium every Sunday from 4 to 6 PM. Not sure if that’s Pacific time, but it can be found online.

Anyone who has ever seen an Elizabeth Swann from The Pirates Of The Caribbean action figure that looks more like Mike Ditka than Keira Knightley will appreciate the celebrity dolls created by artist Noel Cruz. As reported by Amanda Schneider in a recent edition of the online newsletter, Lost At E-Minor, Cruz paints over the faces of celebrity dolls to make them look a hell of a lot more like the actual performers. In fact, his renditions of Angelina Jolie, Anne Hathaway, Meryl Streep, Farrah Fawcett, and the kids from the Twilight movies are so lifelike, they’re almost scary. There’s no mention of prices, but it looks like Cruz puts his dolls up for auction on eBay.