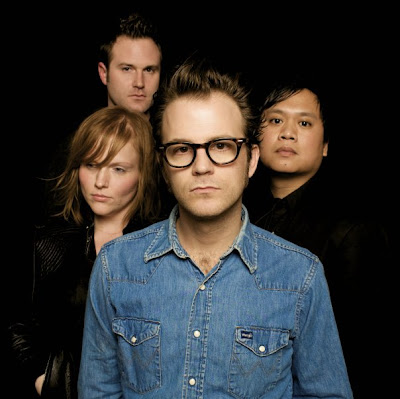 Indie rockers Welcome To Ashley have a show at Township (formerly known as Pancho’s), at 2200 N. California in Chicago on March 16th.

Local author Marian Manseau Cheatham is holding the official launch party for her historical novel tomorrow afternoon from 1:00 to 4:00 PM at the Center For History in Wheaton. Merely Dee is a compelling tale about a young woman struggling with her emotions after surviving the Eastland Disaster, which took place on the Chicago River in 1915.

Tickets went on sale today for The Bad Examples show at FitzGerald’s in Berwyn on March 31st. Meanwhile, the band’s lead vocalist Ralph Covert, who also performs with Ralph’s World, might be going the Doctor Who route with a new TV project. According to Sara Smith’s article in the Glen Ellyn News, Covert has wrapped up work on the pilot for a new children’s show called Time Machine Guitar. As host, he and a trio of puppet sidekicks will use the title instrument to travel through time in order to teach kids about history and other subjects. Covert’s hoping the show will be on national television.

In other Bad Examples related news, the band’s guitarist, Steve Gerlach, is bringing his side project, Tomorrow The Moon, to Quenchers Saloon in Chicago next Friday, March 9th. The bands, Your 33 Black Angels and Planet Creature, are also on the bill. The show starts at 9:00 PM.

Fans who couldn’t make it to New Jersey for the Power-Pop-A-Licious music festival last year can now see at least a portion of it on YouTube. Organized by singer-guitarist Paul Collins, whose power pop credentials include playing in The Nerves and The Beat, the event rocked the Asbury Lanes on April 30 and May 1st with hard-hitting artists like Kurt Baker, The Bam Bams, The Dirty Shames, Future Virgins, The Half Rats, Neutron Drivers, and Collins himself.

Clocking in at just under 50 minutes, Power-Pop-A-Licious: The Movie! was filmed and edited by Derek Davidson. Seeing Collins blasting through “Rock And Roll Girl,” “USA,” and “Walking Out On Love,” along with the various bands, the dazzling merchandise tables, and all those people having fun makes me wish Power-Pop-A-Licious would come to Chicago. Collins will be here on March 25th performing at The Empty Bottle with former fellow founding member of The Nerves, Peter Case.

The New Invaders will be bringing their always impressive 1960s rock tribute show to the Voice Of Care Fundraiser at the Hyatt Hotel in Lisle on March 31st. Voice Of Care is a religious organization devoted to helping developmentally challenged individuals. Kudos to New Invaders guitarist Jimmy Herter on backing up singer Peter Noone at some recent Herman’s Hermits gigs at Busch Gardens in Tampa.

Vicki Peterson of The Bangles recently posted on Facebook that she and Susan Cowsill will be recording a CD together as the Psycho Sisters.

Roxy Swain, a catchy Chicago-based rock band that sounds a bit like The Bangles at times, will be performing at Fitzgerald’s in Berwyn next Thursday, March 8th, at 8:00 PM.

Late comedian Bernie Mac now has a street named after him in his hometown of Chicago, according to a piece by Alexandra Chachkevitch in this past Wednesday’s Chicago Tribune. Honorary Bernie Mac Street is at the corner of 69th and Sangamon in the Englewood neighborhood.

One of power pop’s most beloved bands, The dB’s, are set to release Falling Off The Sky, their first CD with all the original members in at least 25 years, this coming June. The group, featuring Chris Stamey, Gene Holder, Peter Holsapple, and Will Rigby, will be playing six shows as South By Southwest in Austin, Texas later this month. In a related note, I’m happy to welcome Robin Brevard’s The dB’s Repercussion to my list of recommended blogs.

New Millennium Theatre, long known for an ability to turn 1980s flicks into off-the-wall musicals, is looking to fund its next project, We Are Wyld Stallyns Or: How Bill And Ted Save The World, through Kickstarter. The original musical, written by NMT’s new Artistic Director, Meagan Piccochi, would feature two live bands “in an epic rock duel of triumphant proportions.”