Funny How This Looks So Entertaining 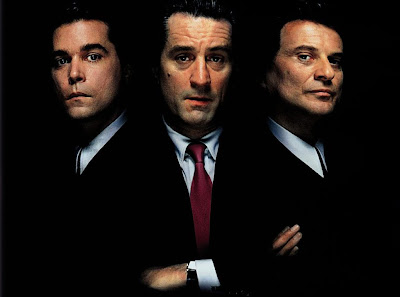 “This band better be good.”

At the risk of someone breaking a wine bottle over my head, I must confess that pretty much the only thing I know about GoodFellas is the “funny how?” scene made famous by actor Joe Pesci. The musicians from Androgynous Mustache are much better acquainted with the film, and the songs director Martin Scorsese used throughout it. They’ll be presenting Covering The Goodfellas Soundtrack tomorrow night (Tuesday, March 13th) at Quenchers Saloon.

Singer-guitarist and musical chameleon Phil Angotti, who has channeled Paul McCartney, The Bee Gees, Squeeze, and other acts in his own tribute shows, will be joining forces with Androgynous Mustache for the first time, along with additional guests, Aaron McEvers on saxophone and Ben Bell Bern on trumpet. Holly Senchak is the only female vocalist listed on the event’s Facebook page, so it looks like she’ll be covering Aretha Franklin’s “Baby I Love You,” along with “Remember (Walkin’ In The Sand)” by The Shangrilas. Senchak’s on-the-mark portrayal of Courtney Love impressed a lot of people at The Abbey Pub’s Halloween tribute weekend last year, so it will interesting to see how she handles The Queen Of Soul and one of the quintessential 60s girl groups.

The other GoodFellas soundtrack tunes likely to be covered are “Rags To Riches” by Tony Bennett, “Sincerely” by The Moonglows, “Speedo” by The Cadillacs, “Stardust” by Billy Ward & His Dominoes, “Look In My Eyes,” by The Chantels, “Life Is But A Dream” by The Harptones, “Beyond The Sea” by Bobby Darrin, “Sunshine Of Your Love” by Cream, “Mannish Boy” by Muddy Waters, and “Layla” by Derek And The Dominoes. In addition to those songs, Androgynous Mustache will perform material that was used in the movie but didn’t make it onto the soundtrack. Throughout the night, the movie GoodFellas will be shown on TV screens, and there will be prizes for answering trivia questions.