CD Review: Saturday Looks Good To Me - All Your Summer Songs 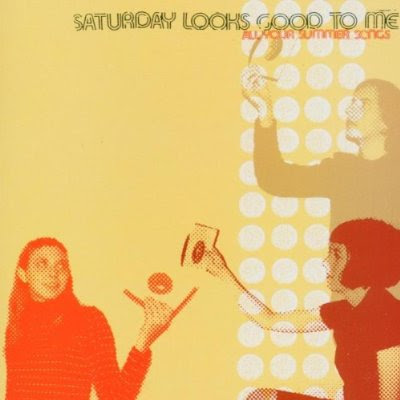 Note: This review originally appeared in the Illinois Entertainer back in 2003. My review of the band's 2004 release, Every Night, also ran in I.E. and was posted to Broken Hearted Toy.

If there isn’t already a sub-genre called slacker-nostalgia, the Detroit-based Saturday Looks Good To Me has surely invented it. Brought together by singer-songwriter Fred Thomas (His Name Is Alive, Flashpapr), these musicians mimic the 1960s Motown artists and girl groups who recorded 45 records like the ones shown on the cover of All Your Summer Songs. At times, the CD’s ironic detachment and studio gimmickry can be distracting, but for the most part, Thomas and company offer a lot of fun music.

After opening with an untitled snippet of horns and keyboards, SLGTM segues effortlessly into the romantic soul of “Meet Me By The Water.” Much of All Your Summer Songs deals with relationships coming to an end. The slow-moving title track and “The Sun Doesn’t Want To Shine” get bogged down, but the acoustic “Last Hour” and highly melodic “Ultimate Stars” are definite keepers. “Alcohol” could have been a hit single for Leslie Gore, while the sad and beautiful, “No Good With Secrets,” is reminiscent of Beck. On the power pop tune, “You Work All Weekend,” Thomas offers some less than comforting advice on how to cope after a breakup: “But whether you get over them or not/They’re still going out without you.”