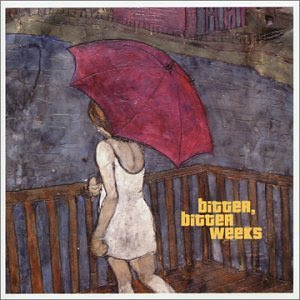 Bitter, Bitter Weeks is essentially Briar McTear, a Philadelphia based singer-guitarist who also produces other artists at his own studio. This self-titled debut exudes a folk club ambience, although “The Best Days Of My Life” was the only track recorded before a live audience. Most of the material features him singing and strumming an acoustic guitar into a single microphone.

McTear’s intimate approach works particularly well, thanks to his engaging voice and the honesty of his lyrics. “TN” and “Taking Pills” deal with the pain of a failed relationship, while “You Paralyze My Heart” depicts a self-effacing guy reluctant to approach the woman he loves. “Like I know your big smile just means, ‘get away’,” he sings. “And I’m so embarrassed by the dumb shit I say.” The sheer joy of “Happiness” raises the questions as to whether McTear is being sarcastic. Whatever the case, he’s put this time away from his producing duties to good use.