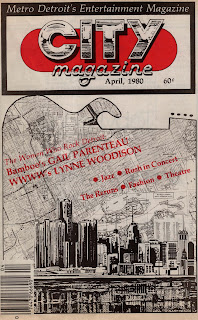 The Detroit-based City Magazine is exactly the type of local entertainment publication I search for whenever I visit another city. But since I’ve never been to Detroit, I can only assume that I picked this up at some north side Chicago record store that carried out-of-town ‘zines. This was the April, 1980 issue, and in addition to rock music, it covered books, theater, movies, and jazz. There were also some vintage Doonesbury-inspired comic strips.

Publisher-Editor Derik Girdwood wrote the main feature, The Women Who Rock Detroit, which consisted of profiles of music publicist Gail Parenteau, who was very big on the English trio Heaven 17; and W4 106 FM afternoon radio personality Lynne Woodison. Both women came across as strong-willed and interesting. Gary Kahn’s Music Reviews covered the Messin’ With The Boys album by Cherie and Marie Currie (years before Dakota Fanning was born); Adventures In Utopia by Todd Rundgren and Utopia; and Bad Boy by Robert Gordon.

City Magazine had a page covering the Chicago Music scene where Windy City vets writer Tom Lounges and photographer Linda Matlow combined forces for a profile on the hard rock band Bitter Sweet Alley. (I think I wrote about them at some point as well, or at least I had a button from them.) Ron Angel reviewed a concert by Rush, who were promoting their latest release, Permanent Waves. There was also a profile of the disco-turned new wave club Nunzio’s.

Hi, this is Derik Girdwood, 20 years later to say thanks for mentioning the magazine. Those were fun days.......although it made little or no money :)

Terry,thanks so much for the mention!

Derik! Long time no hear!
Whatever happened to Jackie S ? She was living in Chicago for awhile early 1980s then vanished on us!

Really good band out of Detroit late 1970s early 1980s.Mark Farner(former Grand Funk Railroad vocalist,guitarist) was giving them a big push..I was doing some work with Mark and Bitter Sweet Alley at the time. I think Dave is still singing,Gary has a recording studio and I think he is producing.I'd love to hear from them;hard to believe this was so long ago.
Terry you should hook up with Tom Lounges,you'd keep each other busy for days talking music and media.
He's on my FB.I'll friend request you.