Short But Sweet - Candy Frosting From The Posies In Chicago 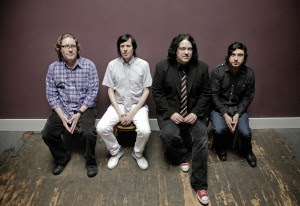 The only disappointing aspect of The Posies’ live performance at The Bottom Lounge in Chicago last Saturday night was that the band was only onstage for about 40 minutes. Sandwiched between sets by opening act Aqueduct and headliner Brendan Benson, The Posies concentrated on songs from the recently released Blood/Candy, along with a few classic cuts from Frosting On The Beater.

Founding members vocalist-guitarist Jon Auer and vocalist-guitarist Ken Stringfellow proved once again on Blood Candy that they’re an impressive songwriting team, and along with their fellow band members, were able to recreate the adventurous power pop arrangements from that CD in a live setting. After the oddly named but highly melodic “Enewetak” ended with some gorgeous Beach Boys style harmonies from Auer, Stringfellow, and bassist Matt Harris, Auer thoughtfully rubbed his chin as if amazed that they had actually been able to pull that off. While introducing one of the new tunes, Stringfellow described Blood/Candy as the best album The Posies have ever recorded.

For the fun “Licenses To Hide,” the band brought out local singer Lauren Kurtz (who had fans in attendance) to help on harmony vocals. “Cleopatra Street” showcased the band in a lighter, Hollies-like vein, but most of the other new tunes, like “So Caroline,” “She Coming Down Again!” and “Notion 99” were delivered with a flurry of energy. The Posies tapped into Frosting On The Beater, which they had performed in its entirety at the 2009 Randolph Street Fest, for the hard-hitting tracks “Solar Sister” and “Flavor Of The Month.” They closed with the single from that CD, “Dream All Day.” There was no encore, possibly because Auer and Stringfellow would be coming back within a half hour to perform as part of Brendan Benson’s band.