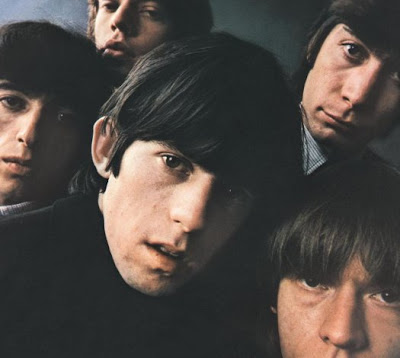 Out of their heads for Black Friday Bargains. Rolling Stones photo from Amazon.

WXRT is providing an interesting spin on the traditional day after Thanksgiving shopping madness with its Paint It Black Friday feature on The Rolling Stones today.

Heavy Manners will be performing tonight, November 26th, as part of the Skanksgiving Ska Fest at The Beat Kitchen on Belmont in Chicago. Skapone and The Crombies are also on the bill, along with a DJ. Heavy Manners will be selling copies of its limited edition red and white vinyl “Get Me Outta Debt” which includes a previously unreleased dub with Peter Tosh. Older singles, like “Flamin’ First,” “Taking The Queen To Tea,” and lead vocalist Kate Fagan’s solo single “I Don’t Wanna Be Too Cool” will also be on sale. Heavy Manners performs at 10.

Haven’t heard from The Queue since its impressive performance earlier this year at International Pop Overthrow - Chicago, so it’s good to discover the local power pop band will be releasing more copies of its limited edition EP, Turn It Up, Turn Me On. The Queue, as its name implies, is influenced by the original British Invasion, and has dates coming up at Abbey Pub on December 23rd and Red Line Tap on January 28th.

Has it really been that long or did we all just travel through time in a TARDIS? Doctor Who has been on the air for 47 years. Of course, there was a short break in the action before Doctor Who reemerged with Christopher Eccleston in the title role. According to the Anglophenia website, the BBC is celebrating by making vintage show-related documents available for public viewing.

Last week when I mentioned that Eccleston was starring as John Lennon in the Masterpiece Contemporary production of Lennon Naked, I neglected to point out that his immediate successor on Doctor Who, David Tennant, is the host of that program. Speaking of Tennant, fans can send him their Christmas messages via his Facebook fan page.

A recent Mary Schmich article in the Chicago Tribune had good news for people who miss artist Nicole Hollander’s liberal-minded and sharp-tongued Sylvia comic. Hollander’s essays and drawings can now be found on blog run by Alicia Eler. Schmich explains that the blog reaches a smaller audience, but that its format allows Hollander to be more immediate and direct.

Another story in the Chicago Tribune talked about senior citizens performing in a band called, Old’s Cool. They cover songs from the 50s through the 70s. Considering how many of the original acts from those eras are still active, I’d suggest Old’s Cool change their name and just go out on the club circuit like any other band. Once audience members see how old these guys are, they’ll just assume they must be famous.

Terry, Thanks for mentioning the Chgo Tribune article and Sylvia's new venture. It's more fun than any writing I've ever done...you must know that feeling. Thanks! nicole

Nicole: Thanks for your comment. I think a lot of people enjoyed the Sylvia comic and would be happy to hear about your blog.