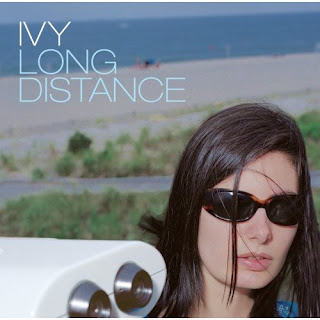 This new feature, where I present something I actually wrote several years ago, takes its name from a line in a sketch Dave Drazin wrote for the Famous In The Future comedy group. First up is a review of Ivy’s 2001 release, Long Distance, that was published in the Illinois Entertainer.

Adam Schlesinger’s two bands, Fountains Of Wayne and Ivy, couldn’t be more different. The former specializes in catchy pop songs delivered from a wise-cracking geek’s point of view, while the latter is all smooth grooves and European chic. With Ivy, Schlesinger, along with Adam Chase and French-born lead singer Dominique Durand, weaves elements of rock, trip-hop, and jazz into a sophisticated sound that’s uniquely their own.

Many of the songs on Long Distance are about troubled relationships. There’s a recurring theme of starting over that first surfaces on “Edge Of The Ocean,” a slow, dreamy song that features layered vocals and elegant piano playing. Ivy adds tropical percussion and Latin style horns to “Let’s Stay Inside,” an irresistible tune that promises sunshine will return once the stormy weather passes. “I Think Of You” is a simple, pretty song that suggests, “If we try, we can begin again.”

Other tracks explore relationships that are beyond saving. On the guitar-based “Blame It On Yourself,” a woman encounters her ex coming out of a store and brushes past him without saying a word. "Lucy Doesn’t Love You” is an energetic song that features a soulful arrangement, while Durand underscores the irony of “While We’re In Love” by seductively describing the emotional damage lovers inflict on each other. “Disappointed” is slow techno song about another doomed affair.

Love is depicted in a more positive way on “Midnight Blue,” which offers a wonderful fantasy built on sci-fi imagery, swirling synthesizers, and some funky guitar playing. Long Distance also includes an unlisted cover of The Blow Monkeys’ “Digging Your Scene,” done in Ivy’s unmistakable style.

Ivy’s website, which was last updated in 2009, promised a new CD for the beginning of this year. No sign of it yet, but I’m definitely looking forward to new material from them.