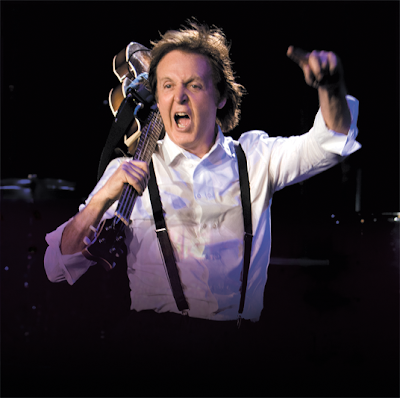 Longtime listeners of WXRT in Chicago know how fanatical on-air personality Terri Hemmert is about The Beatles. So we all shared in her excitement this week when she was one of the chosen few invited to watch Sir Paul McCartney receive the Gershwin Prize at the White House. Hemmert called in to Lin Brehmer’s show from Washington, D.C. the next morning to describe her adventure, and her genuine excitement was touching. Congratulations, Terri! And of course, congratulations to Paul.

Speaking of WXRT, Saturday Morning Flashback, the program that each week examines a different year via songs, sound bites, and host Wendy Rice’s charming commentary, celebrates its 25th Anniversary tomorrow. It will feature the year when Flashback began, 1985.

A few months back, Puerto Muerto, the Chicago-based indie rock duo comprised of vocalist-percussionist Christa Meyer and vocalist-guitarist Tim Kelley shocked its fans by breaking up shortly after the release of its critically acclaimed CD, Dueling For Pistols. Meyer has since formed a new project called Man Is Man with cello player Ben Kulp. True to Meyer’s eclectic background, the name is a reference to play by Bertolt Brecht. Man Is Man’s stark but enchanting first song, “The Disease” can be heard on its MySpace page.

Galileo Players have a long history of successfully mining humor from intellectual material. The Chicago-based improv troupe, whose founding member Matt Hovde has become a highly successful director in town, is now making episodes of its ambitious Science Digest web video series, including the 1981 pilot episode “The Astronaut,” available on YouTube.

Anyone who has seen The Bangles play live in recent years has surely noticed their exuberant keyboards player “Harpo” Hilfman. Now the band is coming to the aid of his wife, who needs a kidney transplant. They’ll be performing a Benefit Concert For Cindi Hilfman, which will be held just outside of Los Angeles on July 30th at Theatricum Botanicum. Fans can also support Ms. Hilfman by bidding on Bangles items, such as a skirt donated by Susanna Hoffs, on eBay. Best wishes to Mrs. Harpo.

While its sad to see The Go-Go’s breaking up, at least their farewell tour has given a number of fans a chance to express their creativity. The band and the Rock ‘n Load entertainment agency are sponsoring a contest to design a t-shirt that will become part of the tour’s official merchandise. The deadline is June 17th, and several of the entries can already be viewed on Rock ‘n Load’s Facebook page.

Index: The Bangles, The Go-Go's, WXRT