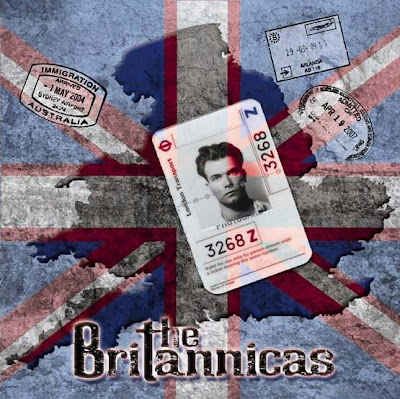 I’ve been hearing about The Britannicas for some time now, mostly via Facebook updates from vocalist-guitarist Herb Eimerman. I’m still not clear as to whether the members of this band have actually met each other. Eimerman, who has recorded power pop solo efforts as well as having teamed up with Jeff Murphy of Shoes as The Nerk Twins, lives in America. Vocalist-guitarist Magnus Karlsson, who has performed with Happydeadmen and The Charade, lives in Sweden; and vocalist-drummer Joe Algeri, who was part of Jack & The Beanstalk, resides in Australia. The three musicians recorded tracks in their home studios, and eventually, the puzzle was pieced together and mixed at Mixmagic Productions. So The Britannicas have used modern technology to create music that sounds like it’s over 40 years old.

Once you get past the irony of the situation, it’s easy to admire the results of this international experiment. The Byrds are the most obvious influence on this self-titled debut, judging from the ringing guitars, harmonies, and sophisticated tempo changes, particularly on the opening track, “Those Good Vibrations.” The easy-going 1960s vibe on “Stars” also evokes Peter & Gordon, while the harder-edged “Baby Say Yeah Yeah” sounds more like garage rock. The highly polished “One Of These Nights” proves that working in three separate countries apparently didn’t cause any production problems for these guys. “The Girl From Majasana” has the most modern edge, sounding a bit like something The Smithereens might have done. As I noted before, I don’t think it’s a good idea to end a CD with slow tunes, but by the time The Britannicas do that here, they’ve already made a good impression.

The Britannicas' debut CD, which was released via Kool Kat Musik, should be available on cdbaby and iTunes within the next few days.