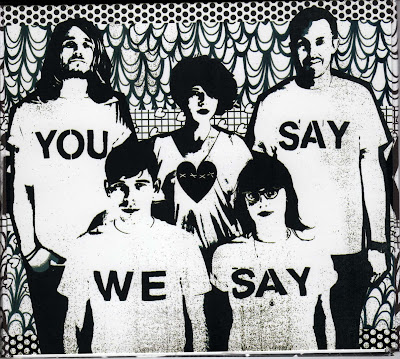 Note: This review originally appeared in the Illinois Entertainer. After the review was printed, Devon Clifford, the drummer for You Say Party! We Say Die! suffered a fatal brain hemorrhage from congenital defects while performing at a concert. My condolences to the band and his family.

You Say Party! We Say Die! has been taking us back to the original punk and new wave era of the 1980s since the band first came together in British Columbia in 2006. That continues to be the case on recently released XXXX, which is filled with impossibly catchy guitar and keyboard driven arrangements. The title is the band’s alternate way of writing the word ‘love’ and is also conveyed by a heart on the CD cover.

The band’s view of romance usually involves being saved from a terrible fate. On the atmospheric “Dark Days,” lead vocalist Becky Ninkovic sings, “After the rain comes and drowns us in sorrow/The light comes in” while effectively channeling Siouxsie Sioux. Redemptive love is also the message of the beautifully haunting “There Is XXXX (Within My Heart).” YSP! WSD! does live up to its name with the violent imagery of the hard-hitting and scary “Cosmic Wanship Avengers.” XXXX might sound retro, but when music is rendered with this much intensity, there’s no need to look for an expiration date.