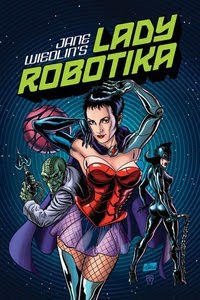 Congratulations to The Go-Go’s for being honored with a star on Hollywood’s Walk Of Fame. Now if only this would keep them from breaking up. Meanwhile, Jane Wiedlin, whose recent injury caused the Go-Go’s to cancel their tour, is sure to be much more durable in her comic book persona, Lady Robotika. The musician is telling fans on Facebook that they need to pre-order Issue #1, which will be published by Image comics, at their local comic shops by June 24th. Maybe if the comic book-loving nerds on Big Bang hear of Wiedlin’s alter ego, it will result in a guest spot on the show for her.

Bangles guitarist-vocalist Vicki Peterson has extended her congratulations to The Go-Go’s on their Walk of Fame honor. In a separate tweet, she noted that she, sister Debbi, and Susanna Hoffs just finished a new Bangles song that will be a tribute to famed songwriter Toni Stern.

Indie rock for a good cause: The Handcuffs will be performing at a benefit for the Chicago Abused Women Coalition at The Viaduct on Saturday, June 19th. The show starts at 10PM and admission is $10. The Handcuffs will also be part of an impressive double bill when they and Phil Angotti perform in Millennium Park on Thursday, June 24th. Angotti kicks things off at 4PM, followed by The Handcuffs at 5:30PM.

Avant garde indie rockers WhiteWolfSonicPrincess are coming off a successful gig at Goose Island on north Clark Street, and will be playing from 1PM to 2:30PM Saturday afternoon at the Custer’s Art Fest in Evanston. The stage will be located at Chicago and Main Street. Leave it to radical guitarist-vocalist James Moeller to make a crack about Sitting Bull on his Facebook post.

Yesterday, I did a post about Paul Collins, and wondered if he would be coming to the Chicago area soon. I’ve just heard from Martha Westbrook, the Midwest Commander for The Beat Army, that Paul Collins will be performing at The Empty Bottle on August 25th.

Hollus, a Chicago band that exudes the look and sound of classic 1970s rock bands like The Faces and The Who, has just released its first official video. Their well-produced clip for “Songs That You Love” features the musicians and friends frolicking at various locations, and finds Hollus working in a lighter, jangling pop mode. Maybe those appearances at International Pop Overthrow are rubbing off on them. At any rate, it’s a good song and a good video.

Happy birthday to Paul McCartney. Nice to see so many contemporary musicians and groups saluting him on Facebook.

Anyone familiar with the anecdote about how Paul’s original working title for “Yesterday” was “Scrambled Eggs” will hopefully get a kick out of a running gag my wife and I have going on our comedy series, Manchester Gallery. And when I say ‘comedy series,’ I mean some short clips that can be seen on the Sunday Morning Coffee With Jeff Internet program. I play an inept and untrustworthy curator of a pop culture museum. On one episode, I displayed the scrambled eggs Paul was eating when he came up with up with “Yesterday,” and explained that they were on loan from the Treasures Room at the British Museum in London. Unfortunately, I didn’t keep a close enough eye on the eggs, and the episode ended with the Gallery’s feline mascots eating them. In a more recent clip, a private dick hired by the British Museum came by to inquire about the eggs. All of this is fictional of course, but if you’re looking to celebrate Paul’s birth in a wacky kind of way, you can check out the episode at Jeff’s blog.