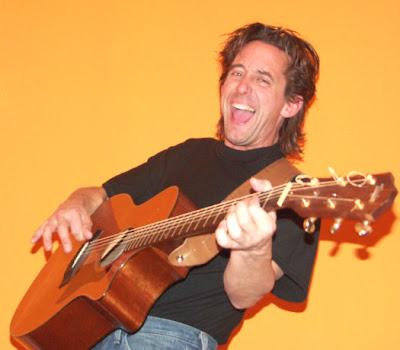 I’m not really sure what kind of kids music was available when I was a tyke. I only remember my Mom singing Betty Johnson’s 1958 hit “Little Blue Man” to me. The song was about a woman being stalked by the title character, who keeps proclaiming, “I wuv you!” Eventually the woman throws him off the top of a tall building.

These days, singer-guitarist Ralph Covert takes a more positive approach to singing to kids on his Ralph’s World CDs. I’ve enjoyed Covert as the lead vocalist of the power pop band The Bad Examples, but the only thing I knew about Ralph’s World was that we sold a lot of the CDs when I worked in the music department at Borders. So when Ralph’s World came to the Downtown Palatine Street Fest last Sunday, I walked over to check it out.

Similar to the stuff he writes for The Bad Examples, Covert’s Ralph’s World songs have catchy, guitar driven arrangements. But instead of singing about romantic relationships or surviving the rock ‘n’ roll lifestyle, he’s dealing with dancing animals and chocolate cake mountains. Working with a full band, he offers plenty of “Freddy Bear The Teddy Bear” and “Four Little Duckies” silliness, but several of his tunes are genuinely clever.

“Dinosaur Rumble” comes up with some funny consequences of playing with a prehistoric beast, like when he demolishes the swing set. “Surfin In My Imagination,” a fun Beach Boys style song, encourages kids to be creative, while “Happy Not My Birthday” suggests that you don’t always have to be the center of attention to have a good time. “The Coffee Song” pokes fun at Mom and Dad’s need for a daily dose of caffeine.

Part of the success of Ralph’s World must be that parents trust Covert not to create songs that will drive them crazy. The adults in the audience at Downtown Palatine Fest were having a great time singing, dancing, and jumping up and down with their kids. Covert gave them all quite a workout with shouted suggestions like “Let’s hop like frogs!” or “Let’s flap our wings like bats!” After an hour long set of breezy songs like “Happy Lemons” and “At The Bottom Of The Sea,” Covert invited kids and their parents to join him onstage for a rollicking finale that included a snippet of Grand Funk Railroad’s “We’re An American Band” and a parody of The Rolling Stones’ “Satisfaction” called “Nap Time Action.”