Hollies Reflect Back On Their Origins 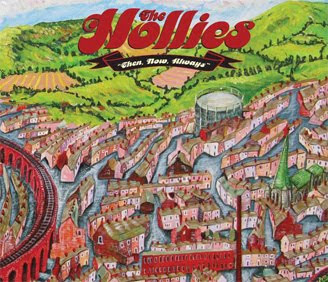 Over four decades after emerging as one of the British Invasion’s top acts, The Hollies cast a nostalgic look back at their early days in the city of Manchester on the title track of their latest CD, Then, Now, Always. It’s the band’s second new release in recent years, after going twenty some years without recording anything new. Contrary to what most Americans might think, The Hollies never broke up, and still tour extensively throughout Europe. Their last visit to the States was a mini tour in 2002.

Drummer Bobby Elliott, one of the group’s two remaining original members, wrote “Then, Now, Always” with Mark Nelson, and it’s sung by Tony Hicks, the other original member. Hicks is a superb guitarist and has always played a key role in constructing the band’s legendary harmonies, but he’s on unfamiliar ground as a lead vocalist. “Pegasus,” from The Hollies mid-1960s flower power days, might be the only other track that features him as the main singer. Still, it makes sense for Hicks to take center stage here instead of current lead vocalist Peter Howarth, who has only been with The Hollies since 2004.

“Then, Now, Always” is a wistful song with a catchy melody, similar in style and sentiment to George Harrison’s “When We Was Fab.” It recalls growing up in an industrial city and playing in small clubs before gaining international fame with hits like “Bus Stop” and “Carrie Anne.” It might be a perfect song for The Hollies to sing at the Rock ‘N’ Roll Hall of fame if the band is ever inducted. Perhaps they could even get alumni like Graham Nash, Allan Clarke, and Terry Sylvester to join them.