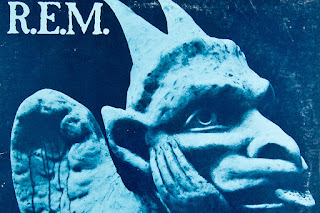 R.E.M. recently celebrated the 40th Anniversary of Chronic Town by releasing its groundbreaking debut EP in CD, picture disc, cassette, and digital formats. Their website also has vintage R.E.M. t-shirts, hoodies, an enamel pin and even a skateboard for sale. Back in 1982, the blue-tinted photo of a gargoyle on the cover offered a visual clue regarding the band’s groundbreaking musical approach. Although obviously influenced by The Byrds, R.E.M. complicated things with hard-edged instrumentation from Peter Buck, Mike Mills, and Bill Berry, along with Michael Stipe’s moody and difficult to understand vocals.

The opening track “Wolves, Lower,” with its unusual advice of “Suspicion yourself, suspicion yourself, don’t get caught,” took FM radio by storm. I still remember being drawn to “Wolves, Lower” the first time I heard it on WXRT in Chicago. To this day, there’s something hypnotic about the way Stipe describes a corner garden, a house in order, and wolves at the door. While there’s no references to ghosts or monsters, it’s still a solid choice for a Halloween party playlist.

The elusive spirit of Chronic Town carried over to the full-length Murmur, particularly on “Pilgrimage” and “Perfect Circle.” Eventually, R.E.M. evolved from a college radio sensation to world-wide acclaim, and influenced countless new bands. But they never lost that air of mystery, and for that, here’s a tip of the witch hat for all the years R.E.M. kept us in the dark.