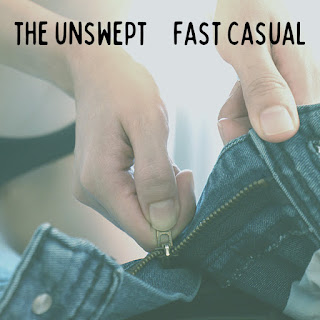 Fast Casual, like The Unswept’s previous three albums, does a good job of capturing the quirky fun of the trio’s live performances. The official story of how the O’Brien cousins—Charlie, Liz, and Ryan—moved from Sheffield, England to Chicago’s Logan Square neighborhood seems far-fetched at times, but always clever. Their stage presence taps into that same British sense of humor with entertaining results. The Unswept’s songwriting approach has evolved over the years, with Fast Casual being their most adventurous album yet.

“You Keep Me Company,” the tale of a mild-mannered restaurant patron’s secret obsession with his waitress, is more familiar territory for The Unswept. “You keep me company even if you don’t know it,” Ryan O’Brien sings to a catchy arrangement. “You make me feel alive even if I don’t show it.” Liz O’Brien takes centerstage on “Got Lucky,” an upbeat look at finally finding love, set to jangling guitars.