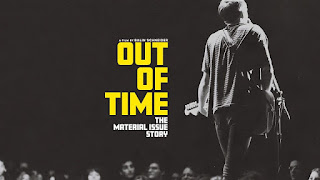 Ellisong Studios is currently selling t-shirts, posters, and stickers to help fund its upcoming documentary Out Of Time - The Material Issue Story. The film concerns the power pop band, which along with Liz Phair, Smashing Pumpkins, and Urge Overkill, brought major media attention to Chicago’s vibrant music scene in the early 1990s. Out Of Time is due out in 2021.

On the topic of music documentaries, an article by Jon Bream in yesterday’s Chicago Tribune (picked up from the Minneapolis Star Tribune) recommends several films that can be watched on streaming services or DVDs. Bream’s list includes documentaries about Bob Dylan (Don’t Look Back), Al Green (Gospel According To Al Green), Los Angeles punk (The Decline Of Western Civilization) Sixto Rodriguez (Searching For Sugarman), Amy Winehouse (Amy), David Crosby (David Crosby: Remember My Name) and a number of others.

Dion started with The Belmonts back in the late 1950s, and these days, he’s recording with Jeff Beck, Bruce Springsteen, Joe Louis Walker, Van Morrison, Brian Setzer, Joe Bonamassa, Sonny Landreth, Steven Van Zandt, and other famous musicians. The Bonamassa-produced Blues With Friends album is available for pre-order on Amazon, and a number of the tracks are already available for purchase in digital format.

Chicago area illustrator Terry Murphy recently posted a video on YouTube documenting her process for designing a t-shirt for the Pino Farina Band. The band’s song “Ocean Deep” plays while Murphy takes viewers through the process. The shirt can be purchased online for a limited time at the Waist Up pop up store. Murphy has illustrated several children’s books and is a member of the Society Of Children’s Book Writers and Illustrators. Full disclosure: I’m also a member of the same northwest Illinois chapter of SCBWI as her, and she has given me some essential advice about my novels over the years.

Manchester Lemon, the U.K. website that champions rock bands such as Oasis, Stone Roses, and The Smiths that have come from the city of Manchester, will open its online store tomorrow. It should be interesting to see what they have for sale.

Jimy Sohns and Jerry McGeorge from the original Shadows Of Knight have reunited and recorded a garage rock single titled “Wild Man” that’s now available on Spotify and other streaming services. It’s first time they’ve worked together since 1967. The Chicago-based Shadows Of Knight first gained national attention back in the 1960s with their cover of Them’s “Gloria.”
Posted by Terry Flamm at 10:29 PM