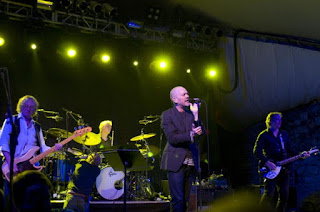 WXRT continues to bring on the big names in its Monday-Wednesday-Friday night series Live From The Archives. The local station has already aired vintage concerts from Blondie, Roxy Music, Robert Plant and others, and this Friday (May 22), it’s offering a 2008 performance by R.E.M. at SXSW. As noted on XRT’s website, the band had just released its Accelerate album at the time and was eager to unveil hard-edged songs such as “Man-Sized Wreath,” “Supernatural Superserious,” and the title track onstage.

WXRT has supported R.E.M. from the early 1980s. I still remember being blown away by “Wolves, Lower” the very first time I heard it on the station. When the DJ announced it was from a new band called R.E.M., I bought its Chronic Town EP within a few days. Who could have guessed back then how many great songs would emerge from R.E.M. albums in the coming years. Tomorrow night’s 90-minute concert begins at 9:00 p.m., and can be streamed via WXRT online.

A new series called Manic Mondays On Friday with Susanna Hoffs and Friends kicks off tomorrow afternoon on the We Are Hear YouTube channel at 2:00 p.m. Pacific Time. Hoffs and co-host comedian-musician-writer Tam Yajia will be joined by Fred Armisen, Cecily Strong, and Red Hot Chili Peppers bassist Flea. So expect some comedy along with the music. We Are Hear helps raise money for musicians affected by the Covid-19 pandemic.

In other Bangles news, the band is offering an autographed CD bundle deal of Ladies and Gentlemen . . . The Bangles and Sweetheart Of The Sun for $60 over the Memorial Day weekend.

As reported by Miriam Di Nunzio in today’s edition of the Chicago Sun-Times, Dennis DeYoung of Styx and Survivor/Ides Of March frontman Jim Peterik will headline the FEED Chicago Virtual Summer Fest on June 4. Donations will definitely be welcome, with funds going to the Greater Chicago Food Depository. Longtime Chicago recording artist Michael McDermott will also be on the bill, along with popular local cover bands Sixteen Candles, Wedding Banned, and Boy Band Review. Whenever I mention Peterik on Broken Hearted Toy, I remember how he was the first musician I ever interviewed—back when I was on the staff of the Chicago Illini newspaper at the University of Illinois at Chicago.
Posted by Terry Flamm at 9:19 PM