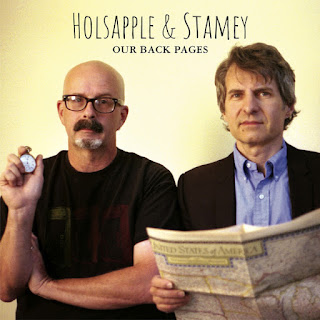 Peter Holsapple and Chris Stamey from The dB’s have a new album that’s only available as a digital download from Omnivore Recordings. It’s part of the indie label’s double-release campaign to raise money for the MusiCares COVID19 Relief Fund. The other digital-only entry is the 12-minute song “Do The Primal Thing (Extended Version)” from NRBQ. Our Back Pages finds Holsapple and Stamey crafting sweet harmonies and new, acoustic arrangements on 11 tracks from The dB’s impressive collection of catchy and emotionally complex pop tunes. “Happenstance,” “Molly Says,” and “Picture Sleeve” are particularly enjoyable. NRBQ’s “Do The Primal Thing (Extended Version) is a live recording from a 2014 concert at the Fairfield Theatre Company in Connecticut, and features band members Terry Adams, Scott Ligon, and Casey McDonough, joined by special guest musicians.

When The Britannicas recorded their newest single “Walls and Stars” from their homes in three different countries, they weren’t experimenting with social distancing or paying homage to The Rolling Stones’ performance of “You Can’t Always Get What You Want” on this past Saturday’s One World: Together At Home Global Broadcast. It’s the way this international power pop band has been operating for years. Guitarist-backing vocalist Joe Algeri lives in Australia; guitarist Magnus Karlsson and drummer Stefan Johansson live in Sweden; and lead vocalist-bassist Herb Eimerman lives in the U.S.A. Written by Eimerman and mixed and produced by Algeri, “Walls and Stars” features the chiming Rickenbacker guitar, fluid melody, and Byrds-like harmonies we’ve come to expect from The Britannicas, with the added benefit of a bit more crunch than usual. The song is available for download at Algeri’s Egomaniac Bandcamp page.

As I read Duncan Fletcher’s review of the new 45 rpm single from The Cyrcles in the latest issue of Shindig magazine, I was immediately hooked by him comparing the U.K. sextet to Graham Nash era Hollies. Sure enough, a peek at The Cyrcles’ webpage turned up a short clip of them covering “Carrie Anne” at a live gig. As for the new single “It’s All Gonna Work Out Fine”/“Open Your Eyes,” the ringing guitars, catchy melodies, and spirited singing from lead and backing vocalist-guitarist Jon Breward, lead and backing vocalist-acoustic rhythm guitarist Adam Kelly, and rhythm guitarist-backing vocalist Mark Jones are top notch. Either of these songs could have fit right in on The Hollies’ Evolution album.
Posted by Terry Flamm at 8:58 PM