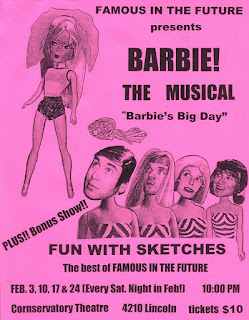 That’s me on the left, in the gang of four.

I’ve mentioned here from time to time that I wrote and performed with the Chicago-based comedy group Famous In The Future for 20 years. They’ve done splendidly since my departure in 2008, and stage the annual Yippie Fest at Prop Thtr on the north side. The event carries on the tradition of Mary-Arrchie Theatre’s Abbie Hoffman Died For Our Sins festival, a freewheeling weekend of performance art that was held every August on the anniversary of the original Woodstock.

I’m still friends with the current Famous In The Future cast, and recently learned that Frank Carr—a founding member like myself—is presenting a viewing party tonight at 9:00 p.m. CST on the Famous In The Future Facebook page. It’s a vintage recording of a Barbie musical in which I sing, and possibly dance, while costumed as a Dapper Dan doll. If you believe in the theory that people become rock critics because they have no music ability, this will provide all the proof you need.

But like a lot of shows I did with Famous In The Future, it was certainly fun. Long-time cast member and Barbie/Marilyn Monroe fanatic Desiree Burcum came up with some clever ideas and songs, and whether intentionally or not, my duet with her is pretty comical. Some of my best memories of this show are of the cast cracking up during rehearsals. At one point, I was supposed enter while Burcum was sitting in a pink-painted cardboard box which I’m about to describe in glowing terms as “her chariot,” and I totally lost it. I haven’t seen the Barbie musical in ages, so who knows how well it will hold up. But we’re all locked down anyway, so why not give it a shot? I’m pretty sure the Famous In The Future Facebook page is public.
Posted by Terry Flamm at 7:49 PM