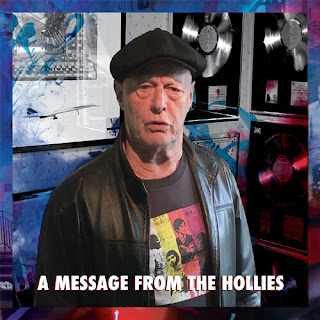 The Road Is Closed. The many a winding turn that led us to sheltering in place and social distancing now includes The Hollies canceling their first visit to Chicago in 37 years. The band’s entire American tour (their first since a 2002 mini-tour of small cities) has been shut down due to Covid-19. The announcement came today on the official Hollies website and a video from drummer Bobby Elliott on their Facebook page. The U.K. portion of their 2020 schedule was scratched earlier. But I’m strong, strong enough to know it was the right thing to do, and believe they’ll keep their promise to visit the U.S. soon. I might feel a bit better though if Bobby Elliott told me where I can buy a Hollies t-shirt like the one he’s wearing in the video.

And don’t forget, you can buy Mr. Elliott’s new autobiography It Ain’t Heavy, It’s My Story - My Life In The Hollies from the band’s website. I’m over halfway through my copy and have found it entertaining and informative. For example, I didn’t know guitarist-harmony singer Tony Hicks once appeared as a celebrity guest on The Dating Game TV show in the mid 1960s.

Work And Love, the second album from the Chicago trio Sunshine Boys, officially comes out tomorrow on Pravda Records, but two of its tracks have already been getting considerable airplay on independent radio stations like Woody Radio and Radio One Chicago. “Infinity Girl” and “Summertime Kids” suggest band members Dag Juhlin, Freda Love Smith, and Jacqueline Schimmel will adroitly balance politically charged rock with expertly crafted pop on Work And Love, just as they did on their 2018 debut Blue Music.

Black Ensemble Theatre’s Ask Us virtual series continues this Friday evening at 6:00 p.m. with its Musical Director Rob Reddrick. The hour-long Live Facebook Chat will give attendees a chance to ask Reddrick about his 30-plus years at BE, the awards he’s been given, and his passion for directing critically acclaimed musicals celebrating iconic African American recording artists.

Outronaut, a guitar-fueled hot rod of a quartet that favors twangy instrumentals, will make its fourth album, Kill The Light, available on its Bandcamp page tomorrow. Steve Gerlach, Ryan Nelson, and Peter Muschong all play guitar while John Carpender pounds the drums. Each of these guys has a long history of performing on the local music scene. Songs on their previous releases include “Back Stabbeth,” “Six-String Massacre,” “Medieval Surf,” and “Dream Sequins.”
Posted by Terry Flamm at 7:27 PM