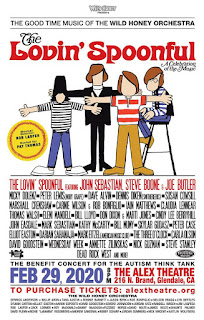 In related news, I bought a copy of The Lovin’ Spoonful’s "You Didn't Have To Be So Nice" 45 RPM single at the Reckless Records in downtown Chicago yesterday. The store always has an amazing selection of picture sleeve records for sale.

Squeeze and KT Tunstall shared a splendid gig at the Chicago Theatre last year and they’ll join forces again—along with Daryl Hall and John Oates—on July 18. That show will be at the far less convenient (for me at least) Hollywood Casino Amphitheater in Tinley Park.

Other concerts that went on sale today include Robin Trower at the Copernicus Center (just outside the Jefferson Park Blue Line station) on September 24; the Girls Rock! 10th Annual Auction at Parson’s Chicken and Fish on February 5; Motels, Bow Wow Wow, When In Rome II at House Of Blues on February 3; and the Chi-Town Sings: British Invasion at City Winery on February 10.

Mark your calendar. The 18th Annual CHIRP Record Fair and Other Delights will be held Saturday, May 2 at the Local 130 Plumbers Union Hall in Chicago.

I’m raising a pint in tribute to Monty Python member Terry Jones, who passed away earlier this week. He was a versatile actor who made each of his characters believable and funny, whether it was a middle-class housewife with a new artificial brain or a somber office clerk who unintentionally made his co-workers laugh every time he spoke. Several years back, my fellow Famous In The Future cast member Frank Carr and I went to an in-store appearance featuring Jones and Hitchhiker’s Guide To The Galaxy author Douglas Adams at the Borders Book Store in Lincoln Park. They were two very clever gentlemen who have left us but won’t be forgotten.

Katrina and The Waves have been back on the concert trail for a while now, and the band just announced on social media that it will have a new album coming out later this year.

Congratulations to actress Jodie Whittaker on signing up for a third season of the title role on the long-running British sci-fi show Doctor Who. She’s been doing a bang-up job.

The current issue of Streetwise has a five-page feature on musical acts coming to Chicago this winter. There are profiles on Tedeschi Trucks Band; GZA; The Wailin’ Jennys; Bob Weir and Wolf Bros.; Lil Wayne; Thom Yorke; Kurt Vile and Cate Le Bon; and others. Be sure to pick up a copy for $2 from a vendor in the downtown area.

There’s a Celebrate The Life Of Kim Shattuck event coming up on March 15 at the El Rey Theatre in Los Angeles. Performers honoring the late power pop/alt rock sensation include Vicki Peterson; Kathy Valentine; Veruca Salt; and The Coolies. Tickets are $50, with all proceeds going to the ALS Association Golden West Chapter in honor of Shattuck.

Scottish musician Midge Ure, who performed with Ultravox and Visage, as well as participating in Band Aid, is coming to City Winery Chicago next Wednesday, January 29.

Sunshine Boys, who are currently on tour with Juliana Hatfield, have announced an IndieGoGo pre-order campaign for a vinyl version their upcoming album Work And Love. Their Facebook page has the link.

The Andy Warhol exhibition at The Art Institute of Chicago closes this Sunday.

The House Theater Of Chicago’s production of Verboten continues its run at the Chopin Theatre through March 8. Written by Brett Neveu with original songs by Jason Narducy, Verboten is set in 1983 and concerns a teenage punk band aiming to rock out the Cubby Bear venue. Nathan Allen is the director.

How To Defend Yourself, Liliana Padilla’s new play concerning college students taking a self-defense class in the wake of an on-campus assault, opened today at Victory Garden Theater, and runs through February 23. It won the 2019 Yale Drama Series Prize.

An email newsletter from Pop Geek Heaven arrived in my inbox today proclaiming that the fifth and final volume of author/musician Ken Sharp’s expansive and informative Power Pop Heroes book series will come out toward the end of this year.

The Chicago European Union Film Festival will bring 60 premieres from Europe to the Gene Siskel Film Center in March.
Posted by Terry Flamm at 9:57 PM