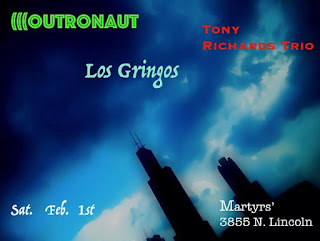 Seeing the Chicago-based, reunited band Spies Who Surf at the Hey Nonny venue in Arlington Heights earlier this month was a pleasant reminder that instrumental rock can be a blast. That fun could be tripled when Outronaut and fellow instrumental bands Los Gringos and Tony Richards Trio perform at Martyrs’ this Saturday on Lincoln Avenue. And to make things even more fun, the bands will rotate their performances in 15-minutes sets over the course of three hours. Outronaut describes its approach as “surf-noir-crime-jazz,” and jazz/bebop guitarist Tony Richards will be joined this time out by bassist John Tate and drummer Larry Beers. The four-man Los Gringos promises “vocal-less renditions of b-sides, deep cuts and originals that could help you ponder your very existence!”

Best of luck to Jason Thomas, who’s no longer with WXRT after a 13-year run. Even with that much time at the station, Thomas was probably still viewed by fans as part of a newer generation of XRT DJs. He hosted the weekly cutting-edge program The Big Beat, as well as doing his regular weekday shift. A Facebook post from him today announced he’ll be taking over the afternoon drive shift at public radio station KVOQ (Indie 102.3) in Denver.

The Yardbirds have a concert coming up on October 3 at The Arcada Theatre in St. Charles. The current lineup features founding member vocalist-drummer Jim McCarty; guitarist Godfrey Townshend; bassist Kenny Aaronson; vocalist-harpist-percussionist Myke Scsavone, and vocalist-guitarist John Idan. All the musicians involved have extensive experience working with well-known artists. Seeing this gig scheduled for The Arcada raises hopes that similar events will be coming the Des Plaines Theater in suburban Des Plaines after it’s been fully remodeled and open for business. Both venues are run by concert promoter Ron Onesti.

Look for an evening of 1960s-influenced power pop as well as decades of cover versions when The Spindles share a double bill with The Last Generation at Danny’s On Douglas in Elgin this Friday night. The Spindles’ most recent release Past And Present includes a cover of The Hollies’ jangling hit “Look Through Any Window” along with catchy originals and a take on The Elvis Brothers’ fun 1980s track “Santa Fe.” The four members of The Last Generation range from 17 to 20 years old but in addition to their own material, play songs from The Beatles, Green Day, Beastie Boys, and Poison.
Posted by Terry Flamm at 8:32 PM