Oh, You Bowie Fans Have Pretty Many Things To Enjoy This Weekend 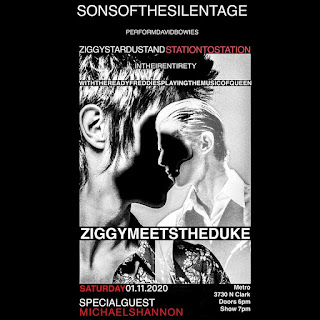 Social media was overflowing yesterday with tributes to David Bowie on his birthday, and if you’re still in the mood to celebrate, Sons Of The Silent Age are returning to Metro this Saturday night. Lead vocalist Chris Connelly has performed with Ministry and Revolting Cocks, and the other eight band members are also veterans of the Chicago music scene. They bring every aspect of Bowie’s mind-bending catalog—from intergalactic adventures to irresistible funk to life, and they’ll be concentrating on his The Rise And Fall Of Ziggy Stardust and Station To Station albums on Saturday. Chicago-based actor Michael Shannon, most recently seen in The Current War and Knives Out films, will be back again as a special guest. The six woman/one man Queen tribute band The Ready Freddies will be the opening act.

Tomorrow night, January 10, Late Bar is presenting the Oh, You Pretty Things – Bowie and Friends Birthday and Memorial Bash with DJ Sonic Marchesa and DJ Carrie MonStar. The concept is to spins records and screen videos of Bowie and the numerous musicians he collaborated with or who were inspired by him. The bar also promises a raffle featuring Bowie-related items. Late Bar is located at 3534 W. Belmont.

My copy of the Bowie - Stardust, Rayguns and Moonage Daydreams graphic novel arrived today; a day late for Bowie’s birthday and a belated Christmas present from my wife Pam. (I knew it wasn’t coming out until early January but it still seemed like such a perfect gift.) Written by Steve Horton and illustrated by Michael Allred and Laura Allred, it’s a wildly ambitious and totally successful hardcover bio. In addition to Bowie, there are full color illustrations of Elton John, Freddie Mercury, Iggy Pop, Roxy Music, The Who, The Monkees, T Rex, Pink Floyd, and other of his musical contemporaries. It’s available on Amazon.
Posted by Terry Flamm at 9:27 PM