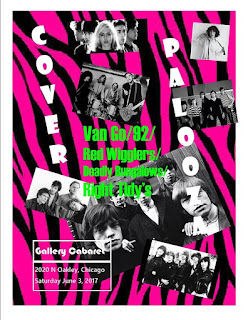 The Cover Palooza event at The Gallery Cabaret last Saturday night gave local bands who usually perform original material an opportunity to pay homage to some of their favorite artists. The cover versions played by Van Go, Deadly Bungalows, Right Tidys, Red Wigglers, and 92 provided insight into the type of music that inspires them. Some of the selections were obscure, which led to a fun audience participation guessing game as to the artists being covered. Luckily, the Gallery Cabaret audience had an extended knowledge of power pop and alt rock.

Van Go’s set (each act did about five songs) included Blondie’s “Dreaming, The Plimsouls’ “Million Miles Away,” and as a change of pace, Def Leppard’s “Wasted.” The Right Tidys offered pumped-up versions of “Under The Milky” by The Church and Freda Payne’s “Band Of Gold,” along with a faithful take on Cheap Trick’s “He’s A Whore.” Red Wigglers had fun adding a horn section to Devo’s “Mongoloid” and World Party’s “Put The Message In The Box.” I wasn’t able to stay for all of Cover Palooza, but I’ll definitely be back if there’s another round.

It looks like YippieFest, the tie-dyed offspring of the annual Abbie Hoffman Died For Ours Sins performing arts festival at Mary-Arrchie Theatre, is aiming to rock. Abbie vets like Frank Carr and Desiree Burcum of the Famous In Future comedy group are looking to carry the torch now that Mary-Arrchie has called it quits after a 30-year run. It has the blessing of former Mary-Arrchie Artistic Director and Abbie Hoffman impersonator Rich Cotovsky.

Singer-guitarist James Moeller from the alt-rock band whitewolfsonicprincess and garage rock outfit The Telepaths, is the designated Music Coordinator for YippieFest. Moeller is also a founding member (along with Carla Hayden of whitewolfsonicprincess) of Black Forest Theatre, which bewildered and amused audiences (in a good way) at Abbie Fest for several years. YippieFest is scheduled for the weekend August 18-20 at Prop Thtr. Musicians interested in performing can contact Moeller via the fest’s official website.
Posted by Terry Flamm at 10:01 PM